Back in August when I had my vet take a good look at Dino for any potential soundness issues, we also took a deep dive into the fit of his bit and bridle.

Currently, I have him in a cob size Collegiate monocrown snaffle bridle, which fits him well for the most part. If we're being picky, the ear cutouts on the crownpiece aren't exactly lined up with his ears, and he could probably use the horse size in that piece, but other than that the fit isn't egregious.

For the past few years I've been riding him in a super basic, nothing fancy, 5" stainless steel french link eggbutt. It's pretty benign as bits go - not too thin, not too thick, 3-part mouthpiece, and gently rounded cheeks. That eggbutt has got to be one of the most inoffensive bits out there.

However, as my vet pointed out, while Dino has been going fine in it up to this point (and honestly, he's gone "fine" in just about everything I've ever put in his mouth. Homeboy is not particular.) the fit of my humble eggbutt isn't ideal for the anatomy of Dino's face and mouth.

For starters, he's got a tiny mouth. I mean, yes, he is a 14.1hh pony, but he's also got a rather shallow space inside his mouth to put a bit in, and a very fat tongue that squishes out over his bars. While the bit I was using isn't incredibly thick, a thinner mouthpiece might fit that space better. The rings were also a little too large for Dino's face, and the bit was hanging just a smidge too low in his mouth, so that when I did pick up the contact, there was a lot of movement and "noise" in the bit and bridle when the contact on the reins changed. Adding to this was the width of the bit - a 5" works okay, but to really fit his mouth well, Dino should probably be in a 4.75" to minimize this excess movement and stabilize the bit. My vet suggested we snug the bit up in his mouth, and that I look for something with smaller rings, a thinner mouthpiece, and a smaller width. 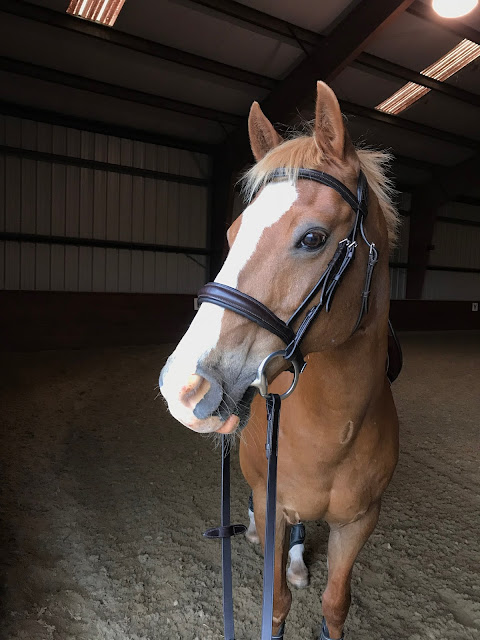 So, I did. I maybe felt a minor improvement with the eggbutt snugged up a hole, but nothing earth-shattering. I also tried my vet's bit (perks of having a vet who is also your barn buddy and a fellow dressage rider!) - a Nue Schule "team up" loose ring. Dino went pretty well in this, and while he was more relaxed in the contact than he had been previously, I felt like he went too deep and over-flexed in this bit vs. the eggbutt.

Lastly, I went shopping. I went to my local Dover store so I could touch and weigh the bits in my hands to get a feel for the differences in shape, thickness, and weight. They didn't have many different "dressage" bits in stock, but I did end up with one that seemed very promising: a Herm Sprenger KK Ultra loose ring bradoon.

The KK was MUCH lighter than the stainless steel but I had been using, had a thinner mouthpiece, a smoother center link, smaller rings, and was angled differently than the eggbutt currently on my bridle. It was also made of their "Sensogan" metal, which is supposed to be warmer and encourage salivation and all that good stuff. 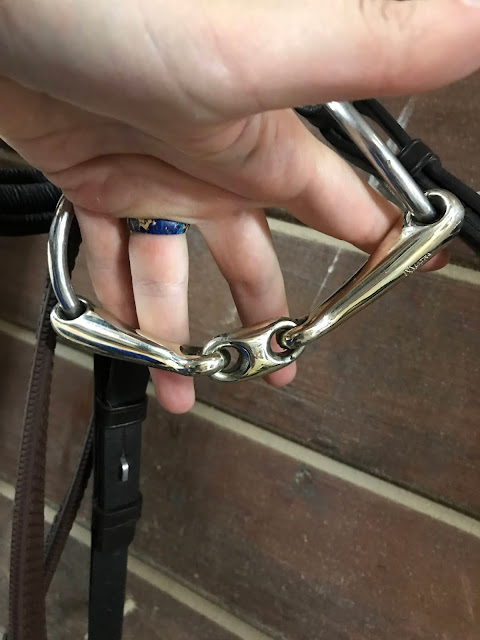 At first glance, the fit was vastly improved! I stuck with a 5" in the loose ring to avoid pinching, but the design of this bit still fit closer and snugger than our old eggbutt even though it was the same width. The small rings led to less "noise", and the thinner mouthpiece seemed to fit more comfortably in Dino's mouth. 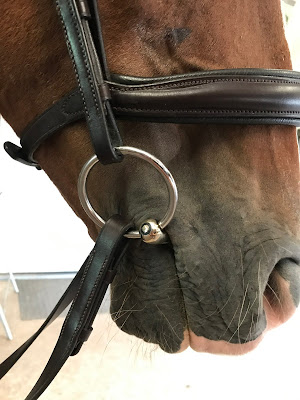 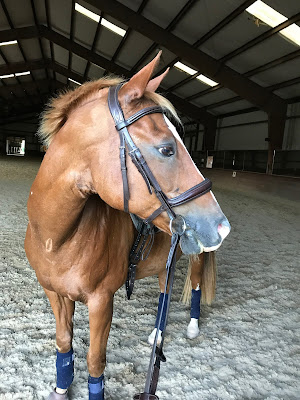 Riding him in the bit wasn't the answer to all our problems, but I DID like the way he felt in the contact! When he took up the connection, Dino felt lighter in my hand in a good way - not avoiding the bit, but holding it gently. His mouth was much less busy than it had been, and the bit seemed to encourage the overall less-anxious experience I'd been trying to create for him. Not wanting to throw more money at the bit problem, I stuck with the KK and he's been going pretty darn well in it ever since. As a bonus, I can use this bit in a double bridle configuration as well! Win-win for everyone.

Has a bit change ever made a dramatic difference for your horse? Or does your creature not care about what's in their mouth?