Della's Happily Ever After 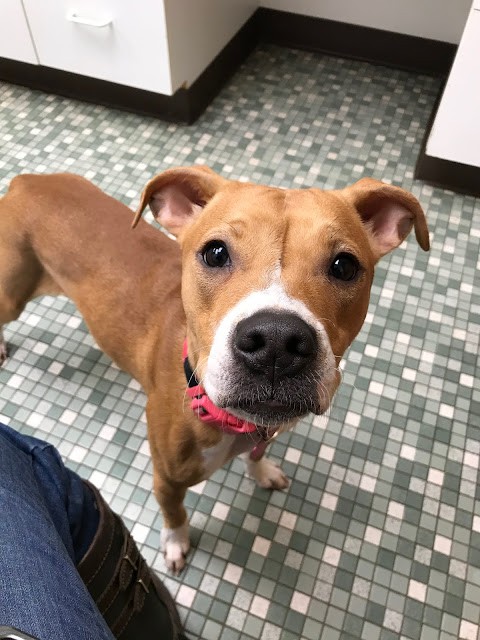 After Lula died, Michael and I started looking for another rescue almost right away. We couldn't stand the emptiness in the house, and we both felt very strongly that we were being called to save the life of a dog in need. So, we started trawling the internet for just the right family member. We looked at hundreds of pictures, inquired about a dog or two, put in applications, provided references, and waited. We hit a dead end with the rescue we had contacted first, felt frustrated and defeated, and decided to keep looking.

And then we saw a picture of a sweet little pocket pittie who had been surrendered to a high-kill shelter in the south the day before Lula died, and we knew.

She was going to be ours. 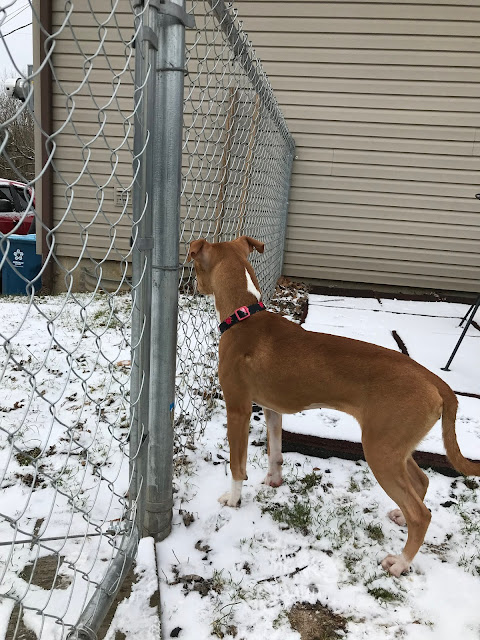 Her identifier with the rescue was "Nativity," since she was pulled from the shelter right around Christmastime. She had been doing so poorly in the shelter - cowering and shaking the whole time she was there - that she was going to be euthanized. But, thankfully, rescue volunteers saw her and pulled her out right away, placing her in a wonderful foster home and getting her all fixed up at the vet.

As soon as I could, I reached out to the rescue and inquired about her, and we were soon approved for adoption. Our family would get to meet her after she got shipped up to Pennsylvania from South Carolina for the rescue's next adoption event. Michael and I couldn't wait. 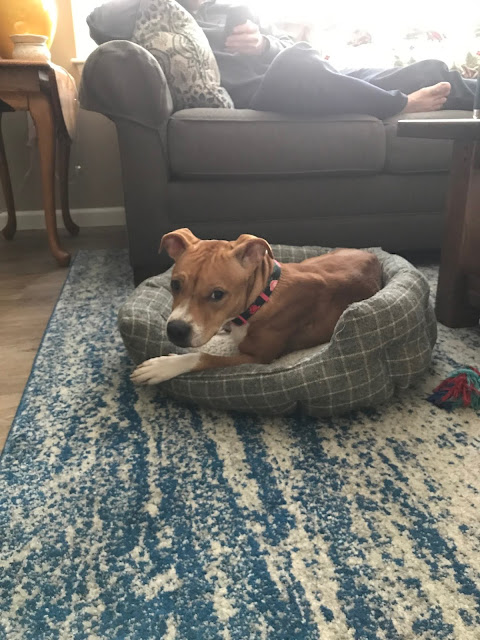 We went back and forth about names during that week of waiting to meet her. We both made a lot of suggestions, but nothing felt right until the name Della came to me one day. Its meaning, one I hadn't researched before settling on the name, turned out to be incredibly fitting - a German name that means Bright and Noble. It was perfect, and I got it engraved on an ID tag, hoping I wasn't jinxing anything.

I was unprepared for how emotionally difficult the adoption event would be for me. There were probably 30 dogs in crates all packed into a vet clinic lobby, and just as many people. Dogs were barking and whining and panting and shaking. So many were anxious, all of them needed homes. And while I knew that if they had made it that far they were safe, I still couldn't help crying as I looked at them all, wanting to take each and every dog home with me. But, we were only there for one special girl. 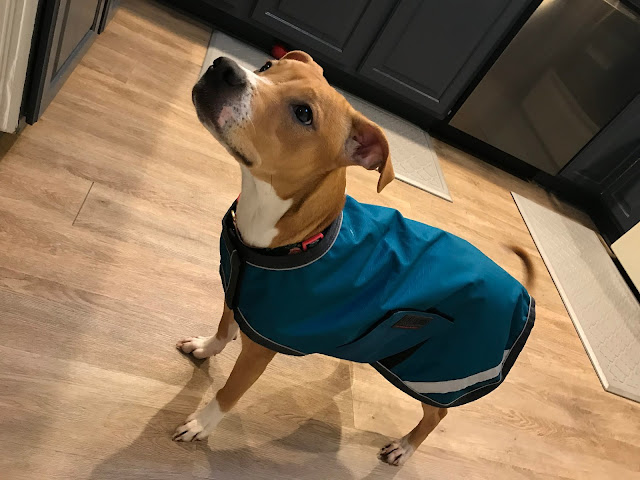 I was immediately impressed with her. Even though she was clearly anxious - her tail was tucked, her ears back, and a worried look was in her eye - she never checked out. This little dog never shut down, she never retreated, she stayed engaged and interested and wanting to know what was going on even though she was very, very uncomfortable with the situation. She licked our fingers through the bars of the crate. We asked to take her outside to meet Max.

The meeting was a total non-event. They sniffed, they introduced themselves, and they both trotted off together to go smell things. Max's approval was the only thing we were waiting for, so after we brought her back inside, I told a volunteer that we wanted her. She was ours, and we were taking her home right then and there. I was already willing to fight for that dog. I cried again when I put her brand new collar on, the pink tag with her true name written on it dangling down. Della. I kissed her head. "Get ready for your best life, girlfriend," I told her. 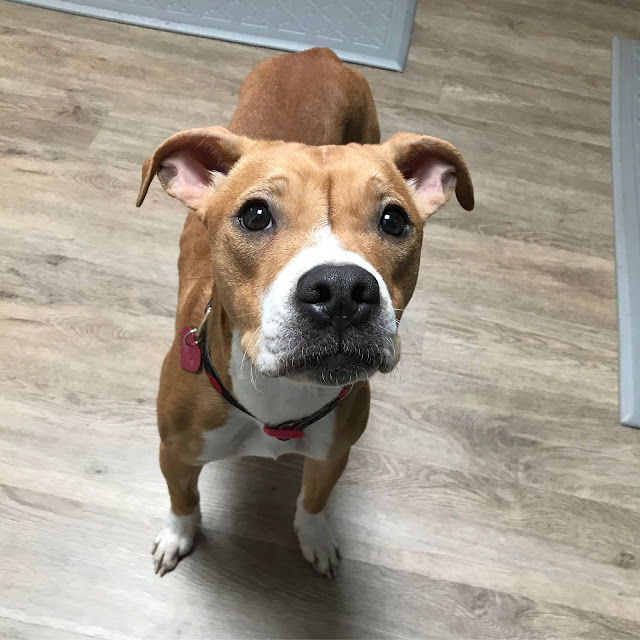 The first day, Della slept. She was bone-tired, soul-tired. Everything she ever knew had changed multiple times in the span of three weeks, and she had been through so much. She was - she is - very underweight. Her entire spine and all her ribs are visible, and her stomach tucks up so much that it looks painful. She has an ear infection. She's easily startled.

But she is sweet.

Della wants nothing more than for you to pet her and call her a Good Girl. She wants to snuggle so hard that she's inside your skin. She has to touch you, constantly. Michael and I are her safe place, and she needs to be with us all the time.

Della loves to give kisses.

In the week that she's been home, Della's personality is shining through more and more every day. She is cheerful, bouncy, delighted in everything. She is sensitive and shy - we are working through stress-related loose stool and skin infections. But Della knows her name and she comes EVERY time you call it, and she loves, loves, LOVES belly rubs. 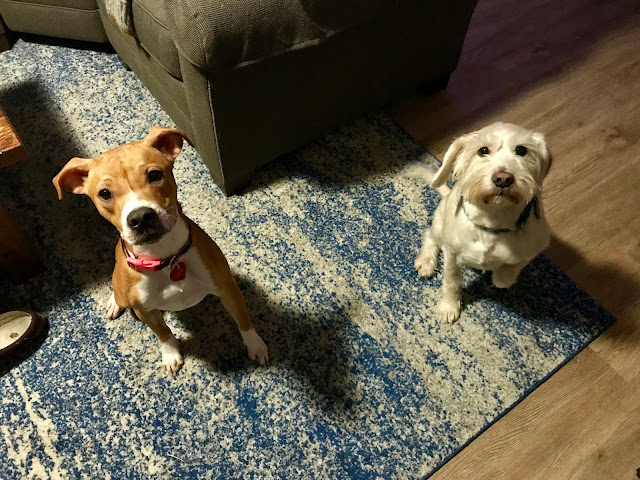 And Della is ours. She is perfect, she is Love with a capital L in a tiny little pit bull body. She has the best forehead wrinkles and the sweetest baby seal eyes. I am honored and blessed to be able to give this beautiful, bright being her Happily Ever After.

Just you wait, Della. The best days of your life have only just begun.
Email Post
Labels: dogs