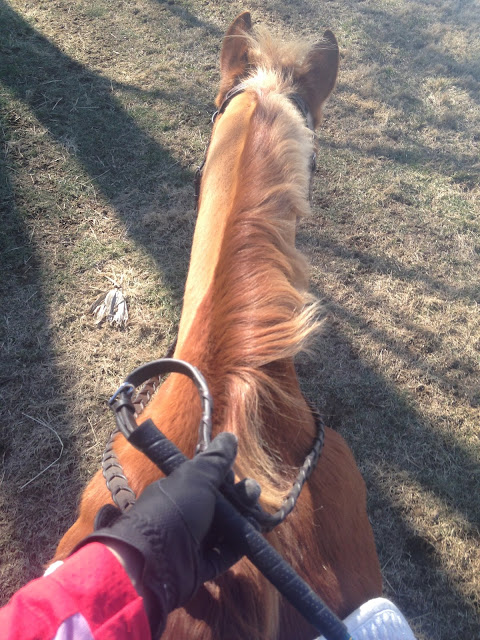 I apologize in advance for the complete and utter lack of relevant lesson media in the next two posts. Potential media-taking people were either a.) busy actually teaching me, or b.) busy watching me struggle to make their horse go.

So. Unrelated around-the-farm shots for you!

This weekend I had double-header lessons on both Dino and Sully on Friday afternoon and Saturday morning. I had chatted with my trainer beforehand about wanting to get some help in my flatwork on both horses, but also wrestling with the fact that my jumping always, always needs [massive amounts of] help. So we decided to do some flatwork-heavy jumping lessons and try and kill two birds with one stone.

I walked into the arena with Dino on Friday (IN A T-SHIRT IN FEBRUARY, FOR THE RECORD) and saw two crossrails set up on each quarter line. "That's cool," I thought to myself, "Technical exercises over low fences are always good!"I got on to warm up, and Trainer arrived and promptly re-arranged the jumps into one single oxer with placing poles on either side.

When she just sets up one solitary fence, I'm in for a world of difficulty.

With the arrival of some unseasonably warm 70-degree weather, all of the windows in the indoor were open wide. I thought this was great, but coupled with the very strange noises that the chickens, goats, and assorted exotic birds were making just outside, this made for a very distracted pony. Dino wanted to stop and look out each and every window each time we passed, and spent a lot of time trying to spook at the door. Because, chickens. Or something.

Combined with him having most of his winter coat still intact on what was a decidedly summery day, and Dino was difficult to get motivated. Our flatwork warm-up consisted of me riding in a very light seat most of the time, going back to my hunter roots and pretty much just hovering over the tack in all gaits. When he feels sticky and stiff like that, it's really amazing how much a light seat helps him find forward! It's just tough for me to remember to use that tool - my go-to response is generally to get heavy in my seat and want to physically push him along, instead of getting out of his way and LETTING him go forward.

My trainer also really got on me in both lessons for nagging with every aid available to me. Leg, spur, whip, clucking, all of it. I just tend to keep asking for forward in every way I can without a lot of response on Dino's part, basically training him to tune me out instead of giving him one good crack, having him surge forward, and then being done with it. This habit is so frustrating to me, but it's good to have my trainer there to point out when I'm doing it.

It really reared it's ugly head in the first couple canter departs of the lesson, during which Dino ignored my request and I REALLY wanted to sit down hard in the saddle and flap around like some sort of deranged bird.

What did work? Getting up in half seat, planting my hands in his neck, and whacking him with my whip. Voila, canter!

We also worked a bit on trot leg yields, which are mostly a matter of me letting go, continuing to breathe, and thinking sideways without spurring the crap out of my pony. Leg yielding into the Scary Chicken Corner never really quite happened, but we did manage some really lovely moments up and down the long side of the arena going both ways. It was very cool to be able to use the giant mirrors to see that, yes, we WERE mostly straight and moving sideways with a bit of cross-over! Definitely some of the nicest leg yields we've done in a while, and it helped make First Level by the end of the year seem like not such a crazy goal after all.

After getting Dino's motor running a bit in a hand-gallop and practicing lots of drama-free canter departs from both the trot and walk (Trainer, I love that you beat the canter depart into us every lesson!) we started in on the oxer.

Oxers, guys. I'm kind of weird about them. They kind of scare me. When it comes to jumping, my greatest anxiety stems from having a pony who's default mode of going is 'behind the leg', resulting in it sometimes feeling like we don't have enough power to make it over the fences, which then results in my response of utter panic and pulling on the reins/bailing out/Dino stopping. Oxers - because they add width to the equation - exacerbate this fear. Cantering down to an oxer without being 100% certain of my distance or having the perfect pace is my worst nightmare.

My trainer, bless her, seems to always know what I'm ready for even if I don't think I am even close to ready to tackle what she has in mind. She decided that Friday was the day when she would pour on the psychological pressure and make our lesson Oxer-Fest 2017. 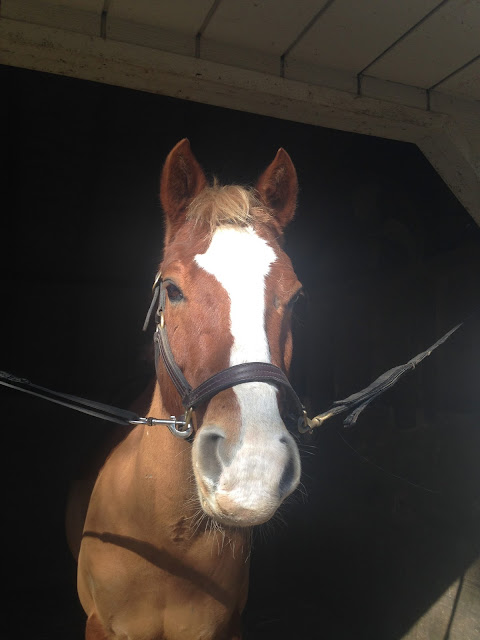 It began with a simple, baby crossrail oxer with placing poles on takeoff and landing, your standard 9' out from the fence. Dino splatted over it a little bit the first time because I didn't demand forward, but we smoothed it out easily with a couple more tries and were soon coasting over it with no problem.

The oxer then grew to about 2', still no big deal, and we added in a straight halt afterwards, followed by walking a few steps past A or C, and then picking up the canter from the walk. This was SO helpful in getting me to focus on riding straight and not just letting Dino coast around the inside turn, and the continued walk/canter transitions really helped sharpen him up to the leg. I was feeling pretty good about things at this point, and then the oxer started getting wider, and we had to start cantering around the turn, getting a lead change, and coming back over the oxer the other way.

We came in once or twice at a longer distance to the placing pole than I would have liked, but Dino really stepped up to the plate and reached over it, and then REALLY reached over the oxer! I was very pleased with what a great effort he was making over the fence, and was trying hard to keep my leg on and keep supporting him throughout the exercise.

And then the oxer got wider.

As the oxer got wider, the distance between it and the placing poles got shorter, requiring Dino to sit and then reach and then sit again, and requiring me to commit to getting to the other side above all else.

The wider the oxer got, the harder the exercise became for me mentally.

We crashed through it a couple times when I got scared of a bad distance and pulled instead of putting my leg on and committing, but Dino still jumped, and NO ONE DIED, and I was able to just come right back around and do it again, even with my trainer's warning of "He's going to be backed off to it the next time around," echoing in my brain. That was a pretty big win.

The hammer really came down, though, when the oxer was at it's full, intimidating width of what looked like 4' of doom to me, and I didn't see a distance, dropped my pony at the base, and he jumped anyway. I praised him on the backside, and he just kind of motorcycled around the turn and came back down to a trot.

And I got in big trouble for telling the pony he was a good boy for just doing what he wanted instead of finishing the ride by going straight and forward and continuing to canter along the track that I wanted.

"You always want to be wrong," Trainer said, "You have to be confident in being right! Be right, even when you're wrong! Tell him what to do, even if you aren't sure!" It reminded me so much of the line from one of Megan's recent posts - Screw up with confidence! I second-guess myself a lot with Dino, I don't want to blame the horse, but at this point I've been riding for 20 years and I need to have faith in the fact that I know how to get from one side of a jump to the other, and to tell my pony how to do that and DEMAND he do it anyway when he thinks about ignoring me! Getting reprimanded for being wishy-washy really rattled me, and I could feel my emotions start to rise.

But it was not a day that I would let those emotions get the better of me. I jumped that wide oxer again and again and again until we were nailing it from each direction, until I was pressing forward out of the turn and attacking it, until I was keeping my leg on all the way across the top of the fence and over the landing pole, until I was riding through each turn on the backside with confidence and impulsion. I did it without shutting down until it was good.

And then the oxer got narrower again, and taller, and transformed into a solidly BN-height Swedish oxer with no poles in front to help me find a distance.

And I jumped that oxer. The first three times it was ugly as hell, because I came out of the turn on a half stride and my hands crept up instead of my leg going on, and I was keeping too much contact in the air and not following Dino's head and neck, but I kept jumping it. I did not panic, I did not freak out, I did not make my pony stop. Dino was getting tired, and needed more from me, and my trainer told me so, and I gave him more. I don't know how many times we jumped that Swedish oxer, but we jumped it over and over again until it was good and our hour was up.

This was, without a doubt, the most mentally challenging and psychologically exhausting lesson I've had in a long time. It was physically exhausting for Dino, too - he had to stretch and compress and find a new level of flexibility within himself. My trainer poured on the pressure and didn't let up - as she said to me as we were having our post-ride wrap-up chat, it was the culmination of years of history and anxiety and discomfort and fear all compressed into one hour-long ride. It was hard, and almost overwhelming, but you know what?

And we did it without one single stop. While I'm a little bit frustrated by all of the things I still have left to work on, and all of the bad habits that won't quite leave me alone, I am SO proud that we were able to do what we did in this lesson. I left feeling more motivated than ever to keep getting better, and while it still seems like a long road to get back to where we were, I think that we can get there.