I was under the impression that switching to eventing from hunterland would mean that Dino and I were done forever with tricky equitation-type courses and lessons with trot fences and transitions and making turns and movements in very specific places in the arena.

My trainer had texted me earlier in the day before my lesson, suggesting we work on some cavalletti and flatwork exercises. I was totally down for that! But I couldn't help feeling a little intimidated when I saw what she had set up in the arena:

We had set up for us two sets of walk poles - one flat on the ground (purple), one raised (brown). Curved and straight trot poles (red), a small vertical end-fence (yellow), and a bending line of two larger verticals with flower boxes (pink fluffy). The black dots indicate a set of standards that served as a marker for transitions as we worked through the exercises of the day.

Dino was blessedly very forward and ready to go to work once again! His great attitude was even complete with tiny, excited snorts, which was adorable. We started with a very energetic walk in our warm up, and it only took a few reminders to keep Dino moving forward with enthusiasm. His great response to the leg continued on up to the trot, and I found myself having to keep him going less and less as he warmed up.

I'm really becoming a believer in the short-reins-head-up-light-seat-go-forward warm up for him. It's proven to be a great way to get all his little old man parts moving and grooving without letting him fall on the forehand and dink around like a western pleasure horse, and helps us transition very nicely from warm up to real work. As Dino's back loosens up, as long as I keep an appropriate rein length and contact, he comes into the bridle all on his own without serious negotiations, which I love.

Once we had trotted around for a while, making circles and changes of direction with a big focus on bending him with my leg and seat, using the reins more as just a supporting aid, it was time to start in on the ridiculous amount of poles that were set up.

We began with the raised walk poles and then continued on to the purple poles, which honestly ended up being the most difficult part of the lesson for both of us!

The walk poles were challenging for so many reasons: Dino really had to think about where to put his feet, and the raised poles required extra physical effort as well. The space between the two groups of poles gave us the responsibility for maintaining the same stride length and rhythm in the walk that we had through the poles. My job - to support with my leg, follow with my elbows, but NOT GIVE UP THE CONTACT or do anything weird with my seat or upper body - was basically impossible. I had a really hard time with keeping my fingers closed on the reins and not leaning forward to "help" Dino through the raised poles. I also had a grand time taking my leg off randomly to "let" Dino "figure out the poles". 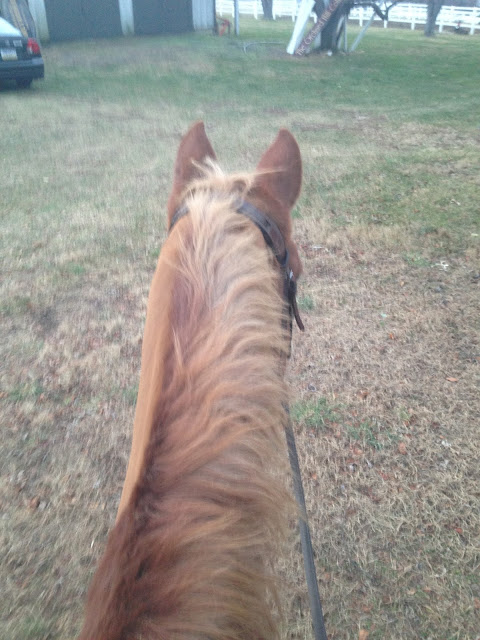 EuroPony, however, was more than game for the exercise! In a way that was almost out of character for him, he showed great interest in the poles and really put in a fantastic effort to figure them out and get it right. When I was able to support him correctly in his work, surprise surprise, the quality and connection of the walk improved DRAMATICALLY once we 'landed' from the last pole.

We quickly added in the trot poles as well, riding from the walk poles through the standards, picking up the trot, and then riding through the curved and straight trot poles. I found the trot portion of the exercise MUCH easier than the walk! I did, however, struggle with keeping Dino bent properly around my inside leg in the corners. At times I was able to really make good contact with my inside seatbone, open my inside hip, and stretch down with my inside leg and get a great bend through the ribcage, but at other times we just motorcycled around.

It's a work in progress.

We cycled through both sets of poles multiple times in each direction, transitioning back down to walk at A and C. As we worked through the exercise and the poles performed their magic, the down transitions to walk got really, reeeeally nice. Forward, uphill, and balanced. Each transition started to make a distinct improvement in Dino's gait, and that was pretty exciting to feel!

After several rounds through the walk and trot poles, we galloped around like wild things and jumped the little yellow vertical a few times to get ready for the canter exercises while my trainer moved some things around. The three curved trot poles had become a crossrail with a placing pole on an angle, so we'd have to bend through the last stride to the fence, and the flowerbox jumps had come down a bit for our first time over them. Things were about to get real equitation-y.

Our first assignment, if I remember correctly, was: Walk poles (purple to brown), pick up the canter, make a circle at the end of the ring, jump the flower box, ride through the empty standards and transition down to trot between them, make another circle, trot the crossrail, land in canter, transition BACK to trot, trot the red poles, make a circle at the end of the ring. The course was all about the in-between, with the obstacles themselves being pretty inconsequential. This was great for me, since my brain gets a little frantic panicking about, "AHH! A JUMP!" and I often forget to ride the in-between.

The first attempt was not pretty.

Dino was a little offended at me asking for a walk/canter transition, and instead of holding myself together and insisting that, yes, he did have to canter, I sort of just threw myself at him and we trotted around at Mach 5 instead before awkwardly jumping the flower box and then totally forgetting about things like "bend" and "track" while making our way to the crossrail. Thankfully, our next effort was much smoother! Mostly because I remembered to sit up and use my legs and insist that my pony behave like the experienced adult equine he is.

After that, my memory of the exact courses gets fuzzy, but I do know that we added in the bending line from one flowerbox fence to the other. Going towards C, it rode pretty well in a 6, but going towards A we had to take more of a direct line in 5 because of the way the purple poles were situated. The first time it totally caught me by surprise and we took a bit of a flyer to the second fence! But, mental victory here, the 'bad' distance didn't worry me at all and I actually LAUGHED about it before trying again, this time with a tighter position and a better plan for where we were going. We also added in a walk/canter transition between the standards on the way to the far flower box, which got better and better each time, and by the end of the lesson we had eliminated the 'set up' circles at the ends of the arena and were able to make better turns and maintain the quality trot & canter we needed to make a good approach to the fences.

While none of our attempts were perfect, we definitely improved each time over the course. My trainer noted that I'm just a little bit slow on the uptake, especially once Dino started really rocking & rolling and taking me to each obstacle. HE was thinking forward - I was still expecting him to be slow to respond! As I'm sure you'll be shocked to hear, the answer to this problem was keeping a better contact with shorter reins and a strong leg position that supported a light, following seat so I could better pilot my steed.

We ended the lesson by working on the bending line from each direction. The fences had gone up a bit by this point, and I worked on getting a crisp walk/canter transition, riding forward out of the corner to the first jump, and then finding a line and committing to it to the second fence. We nailed it in both directions after a couple tries, and called it a night.

Major takeaways and homework from our lesson include:
I feel like the theme of my lessons this year has been re-working my understanding of seemingly basic things, like bend and contact and getting the horse in front of the leg. But I also feel that it's made a big, fundamental difference for us and that we'll be able to apply what we've learned this year to whatever competitive situation we find ourselves in in 2017. It's been a fun year of learning, for sure!