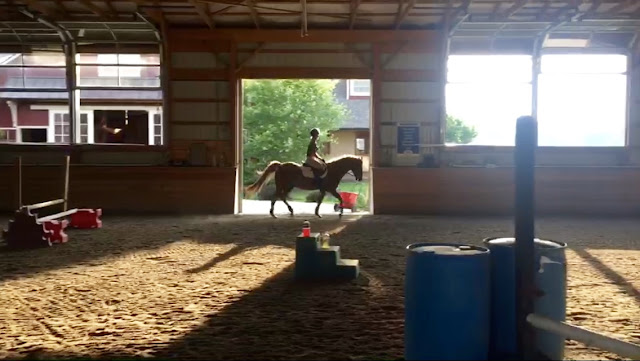 Dino and I weathered the nasty heat and humidity for a lesson last night, and I'm pretty excited about the fact that there is VIDEO, and CRAPPY VIDEO STILLS TO SHARE! My trainer is basically the best, and took a bunch of video for me to go over post-ride to help me break down some of the positional issues we worked on, and she gave me an off-pony exercise to do that will help me explore the places where my body is crooked. She is just as excited about learning as I am, and it is AWESOME. 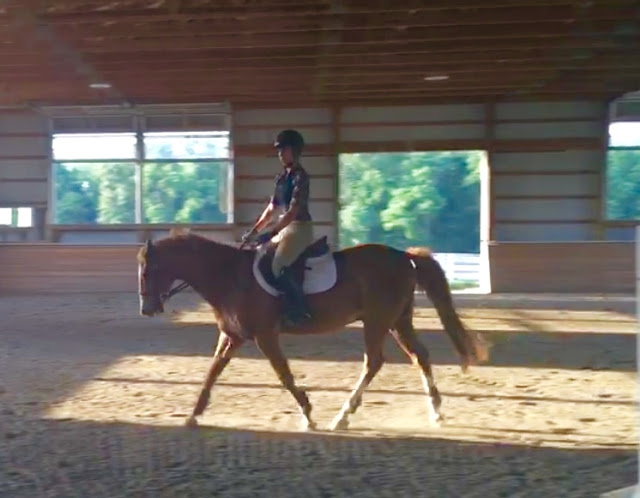 She and I got to the barn around the same time, so I didn't have a ton of pre-lesson warm up time to myself. It ended up ok, though, since it was in the low 90's with 50% humidity and I didn't want to over-do it in the name of getting Dino in front of my leg. He was certainly a bit more sluggish than he was last week, but who can blame him with weather like that?!

Starting at the walk, we focused on me doing less and sitting straighter so that instead of pushing and pulling on Dino, (and encouraging resistance) I could simply allow him to do what I was asking. I rode a lot of turns and changes of direction using my intention as my primary aid, and concentrated on staying relaxed and quiet.

You guys. It was really, stupid-hard. 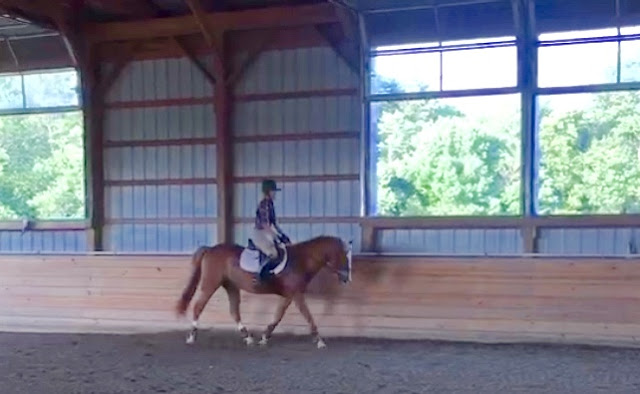 I was flexing all of my brain muscles trying to just SIT THERE, keep the contact, be relaxed, and stop twisting myself into a pretzel to try and get my pony to bend and move off my inside leg and onto the rail.

It's like he's allergic to the arena wall or something, unless he is 110% on point, on my aids in Super Dressage Mode, I have a hell of a time keeping him on the rail in the indoor. So, of course, dropping my inside shoulder, sitting on my inside seatbone, attacking him with the inside leg, and pulling both of my hands to the outside is totally the answer.

My trainer encouraged me to OPEN the inside rein to encourage bend (shocking input, there), take my inside knee off the saddle to allow Dino's shoulders to come around, bring my inside shoulder back, keep my outside rein against his neck where it should be, and un-weight my inside seatbone. 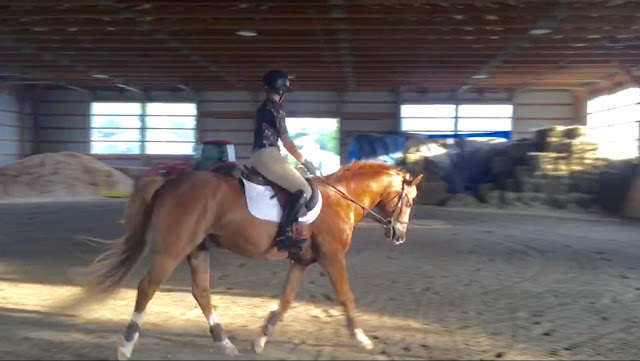 We spent pretty much 100% of our flatwork time on this concept of me being in better alignment so that I stop blocking Dino from being straight. The difficulty here is that I have spent so long getting really good at riding crooked, that I make crooked look damn good. I can equitate my pants off while being crooked as a car salesman, and Dino and I just sort of enable each other's crookedness. Crooked feels straight in my body, and when I did finally click in and ride in alignment, it felt terrible.

We worked a lot in the walk and trot, my trainer mostly giving me the mental space to focus on my alignment while we did simple transitions, circles, and straight lines. She gave me a great visual of my hands being connected directly to the bit to help me stabilize my forearms, which really helped me in the connection! While it was tough to feel when I was crooked, the difference in Dino when I rode straight was obvious, and having his way of going to gauge my alignment was a great tool.

If you want to watch several minutes of boring trotting, have at it. I won't be mad if you don't.


When we moved into the canter, I of course got ready for the transition by getting tense and crooked.

Which was just super helpful.

Dino responded by, get this, not cantering, and just trotting fast with an angry look on his face.

Deep breath, get off the back, relax, kick with the outside leg, and THAT got me the canter.

I'm slowly learning that when Dino is not already super in front of the leg with his back up and walking and trotting off my seat alone, I just can't get the canter with my seat aid. It makes him cranky. I need to get off his back and let him go forward, and things are so much better that way.

I stayed in a light seat for the majority of the canter work, since sitting was tending to make me more crooked and tense, which we were trying to avoid. We had some really nice moments in the canter on both leads as I figured out my life and body straightness, and for the most part Dino just cruised around with minimal input from me and Mr. Whippy.

To get ready to jump, we worked over a set of three canter poles. After splatting through them the first time on each lead, Dino figured it out and we rode them flawlessly. My job was to stay quiet, connected, and supportive without over-riding the poles or doing crazy things in the turns. I'm happy to report that I was successful!

With the right canter, I was also seeing a distance to the poles every time, even though I was in a half seat.

The poles soon changed to a big X with placing poles on either side, and we jumped through that on a bit of a figure-8 pattern for a while. Dino got a little backed off a couple times when the distance was coming up a little longer, and ended up trotting the jump, but I just kept riding forward no matter what was happening underneath me. I was STILL seeing good distances from a half seat, and soon Dino and I were confidently jumping through the exercise on a longer step and taking the gappier distance. From there we built up a course, starting with a little four-stride outside line of a tiny crossrail to a little vertical. Dino was a bit shocked when I first pointed him at it, but I kept my leg on and he jumped!

My trainer began raising the microscopic fences and getting our course ready.

Each course started with the big X on the rail that we had warmed up over, giving Dino a confident start. The first few courses were more huntery, looping around over the outside line (which had now grown to a vertical to an oxer), a single on the diagonal, and another line on the opposite diagonal. My focus was all about staying light, quiet, and supportive, and using my inside aids to lift and bend Dino around the turns instead of pushing him around turn 'n' burn style with my outside aids.

Things were going quite well until Dino tripped and spooked himself after landing from the first fence of the diagonal line, and just couldn't get his legs organized before the second fence, resulting in a stop. Whomp, whomp. I had to give him that one, though, since he did legitimately almost fall on his face. However, when we came at the little gate a second time, I was thinking not about going over, but about the stop.

Can you guess what happened next?!

Yep, I let another stop happen. It was all me, and I knew it. My trainer scolded me for not having amnesia about the first stop. When things like that happen, I need to forget them immediately and ride forward like nothing went wrong. It is SO hard for me to move on from mistakes, and I'm pretty sure learning to do so is going to be an ongoing process for the rest of my life.

The next time we rode the line, we jumped that gate. Dino backed WAY off, but I stayed committed to getting to the other side, and was rewarded for my efforts! I was SO pleased with how I recovered there. During our next course, there were a few little bobbles with less than balanced turns and funny distances, but I was ECSTATIC with the way that I just stayed light, kept my leg on, and kept riding forward instead of going into panic mode. As a result, we jumped all the jumps, and everything worked out just fine.

The jumps went up again at some point, and during another round I made the turn to the big vertical on the diagonal line too hurriedly, missing my line and coming out of the corner with a flyer of a distance up ahead of me and not enough impulsion to back it up. Instead of sitting and waiting for the chip, I panicked and pulled to the stop.

I hadn't done that in SO long, I was so frustrated by it! Again, I needed to just have a case of amnesia and ride forward like nothing had happened, but of course I couldn't let the thought of the stop go. Dino slammed on the brakes again, and I was getting more flustered. Now DINO was getting worked up about it, and had a mini-meltdown over it even though the jump had by then transformed from a large vertical to a teeny, tiny crossrail. He refused. The 18" crossrail. I had to beat him over it at the walk, during which time he knocked the entire thing down with his feet, and then we jumped it twice more until he was over himself and going forward. The fence went back up to a big airy vertical, and we nailed it and were able to continue the lesson without issue. 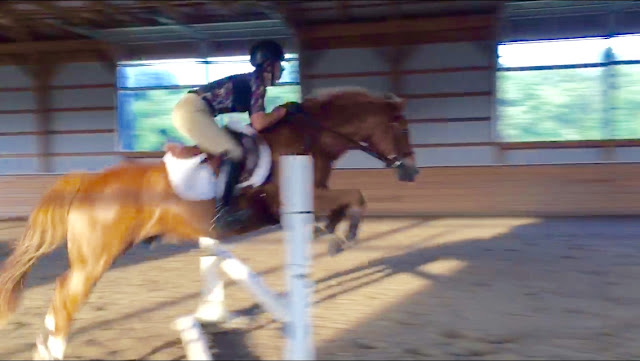 Talk about a GREAT recovery! A month ago that would have totally shut him down for the rest of the lesson, and sent him into Stop Mode. I'm so glad he is in a place where he's feeling mentally and physically good enough to work past these things.

Here we have a video of our last course, which I am SO pleased with! This round was more jumpery, with two rollbacks, and I am so very happy with how committed my ride is, and how I magically found all those jumps out of a light seat. There is of course still tons to work on, but this is a far cry from refusing 2' verticals!


Going forward, our focus on the flat is going to be on my straightness and body alignment, and continuing to work towards doing less and getting more out of Dino. With our jumping, the theme is forward and straight, as always! We have another hunter pace coming up this weekend, and maybe a wee little baby starter horse trial to keep the confidence ball rolling along.

It's great to have my SuperPony back.