In Which I Delve Into The Weird World Of Herbal Remedies

Most of y'all know that Dino came down with the worst case of scratches ever last spring, and I ended up having the vet out and putting him on all sorts of drugs etc. etc.

It cleared up beautifully for the most part, except for a few really stubborn spots on his left hind leg.

I've been washing and treating and applying all manner of goo to it with varying results. MTG, baby butt paste, Betadine washes, Banixx, you name it. The fungus would start to clear up, and then the next day it would scab over again. Not even what was left of my prescription scratches cream was really making much of a dent in it. It wasn't spreading, but it wasn't getting better either.

So after some long minutes spent staring at the wall of topical concoctions at my local Dover store, desperately seeking something new to try, on a whim I picked up some Well-Horse Resin: 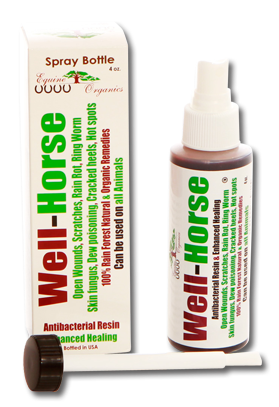 The packaging is pretty hokey, and I'm generally not one to try "all natural" or "herbal" remedies. Give me researched-based science or give me death! This is not a product that I would usually gravitate towards at all. But the ingredients were totally different from what I'd been using, and if Dino's skin funk was starting to build up a resistance, then this crazy-looking hippie juice might be just what I needed. I bought it.

Well-Horse Resin claims to be an anti-bacterial, anti-fungal dressing that encourages healing and the production of new, healthy tissue without stinging or burning sensitive skin.

But I do have to say, the "Before and After" photos on the box were pretty convincing, and the price tag wasn't too terrifying. It was worth a shot.

So far, I'm actually really liking how this stuff performs. I've only applied it three times, and not even consecutively since I've been knocked out with this cold, and even after the first application I saw an improvement in Dino's skin funk.

The skin that was looking bright pink and raw had lost all signs of inflammation, and all of the patches of fungus had dried out considerably. Pretty impressive! I also REALLY like how the liquid resin dries to a hard, dry coating on the skin. It keeps out dirt and mud, but doesn't hold moisture like a thick ointment would. It's the first time I've seen this sort of property in a scratches remedy, and that alone could explain why it's working so well so far.

The only drawback to the Well-Horse resin is that it's really dark red in color - like dried blood. I had to warn people that no, Dino's leg isn't bleeding, I just painted some weird herbal liquid on it.

I will try and be consistent about applying it every day for the next week, and will report back on the results!