Honestly, I don't really want to talk about it.

In short, Dino acted like a fire-breathing dragon from the moment he woke up today and I have no idea WHERE his bad attitude came from. He stopped hard at a fence in warm-up and I fell off. Again. I cried, swore loudly in front of the judge, and strongly considered scratching from all my classes and just going home. Small upside: I did not give up, and I went in and (angrily) completed my first class. Which included approximately 8 refusals, and I am not exaggerating that number. I also forgot the course halfway through. But, I made it over all the jumps (eventually) and stayed on, so that was good? There was also a lot of bucking involved. At the third jump of the second class, despite me placing him at the PERFECT distance and asking nicely for him to just jump the thing, Dino stopped again. At that point I excused myself from the ring and scratched from the last class. If my pony wasn't willing to jump for me when I gave him the best ride I possibly could, put him at the perfect spot, and asked for the jump, the rest of the day just could not go well. Plus the courses were designed by someone who was probably smoking some sort of illicit drug at the time of their creation, which didn't help things.

I'm upset, I'm frustrated, and I don't really know where to go from here. I don't know what the best plan is from here on out as far as jumping goes, and quite honestly I know that I'm too emotional right now to even start thinking about that.

Positive Moments of the Day included getting to cheer on dear friends Rachel and Keri, and Dino being reunited with his bff Toby for the first time since he and Rachel moved away. Rachel and Toby also won first and second place in their classes, and Keri and Jake won grand champion of their division. Yay friends!

And now, my terrible horrible no-good very bad pony laughing at my misery with his fourth place failure ribbon: 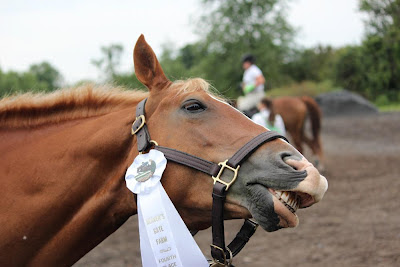