What a wonderful, challenging, successful, encouraging day we had at this horse show! It went better than I could have expected in so many ways.

As I said in my post a few days ago, I was feeling a little apprehensive about our readiness for 1-3. While I really wanted a qualifying 60%, my plan was to just go out there and do our best, and use it as a learning experience to figure out where I need to focus on making improvements. 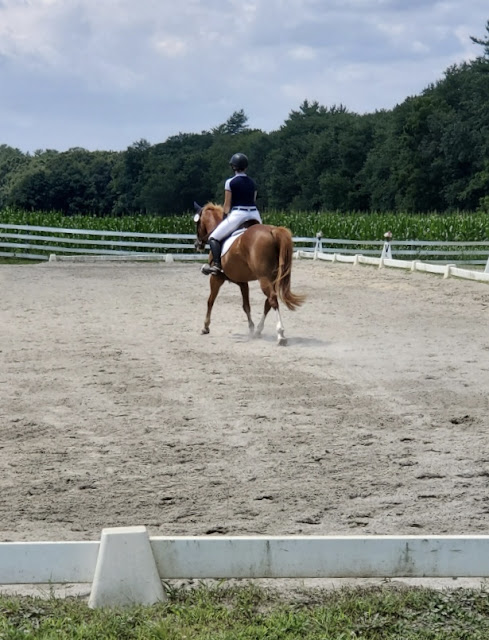 My ride times were at about 12 noon and 1 pm - a boon in the sense that no one had to get up super early, but we'd also be showing in the heat of the day. I hadn't ridden Dino in two tests in one day in quite a while, so I was a little worried that the heat and the extra exertion of a second test might be too much for us, but again, vowed to just get out there and make my best effort.

We rode 1-1 first, and by then it was hot. The warm up ring was small and the footing was DEEP sand. It was not ideal, but I tried to give Dino the best warm up I could by taking him on a stroll around the farm before going into the ring, and getting him as forward and attentive as I could while not over-doing it in the deep footing. I first and foremost wanted to make sure the Go Button was installed, and headed to the show ring feeling confident. I knew my test, I had a plan, and we were going to rock it. 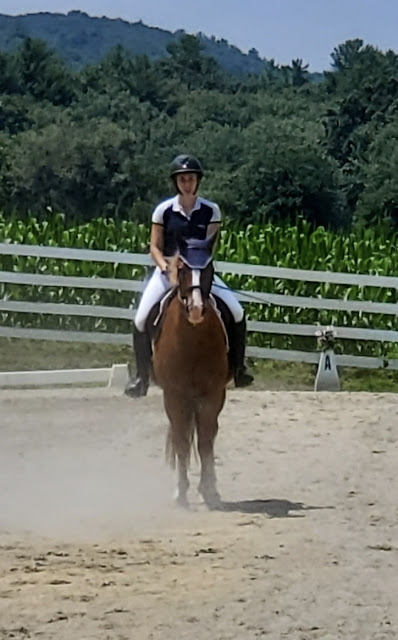 And we did! I was so, so pleased with the test on the whole. We scored our first 8 EVER at First Level on our last centerline, and the rest of the ride was just very solid, very steady, and very obedient. While there weren't any "wow" moments and definitely places where I left points on the table, Dino stuck with me the whole time and just put in a super effort for me. There were a couple transitions that were tense and above the bit, and my 15m canter circles were... creatively sized... but overall I was really happy with how we performed. Earning 7's on Gaits and Rider collective scores didn't hurt, either!

I was shocked and thrilled to see a blue ribbon next to my test, my words were something along the lines of, "Oh my gosh, that's mine. THAT'S MINE! WE WON!" My inner 12-year-old self was squealing with delight! What a great, great feeling it was to be rewarded for all of our hard work this season!

But winning ride aside, 1-3 was still ahead of us!

I was confident that I knew the test, and planned to ride everything as accurately as possible. I knew making square turns before the leg yields would be difficult, due to the aforementioned very deep sand footing that during my first test I discovered was even deeper in the corners of the show ring. I wouldn't be able to ride as far into the corners as I wanted, but that was something I'd just have to deal with. I knew the leg yields and the simple change would be our big challenges in the test, but as long as I could keep Dino coming forward in the canter work, I was feeling pretty good about the rest of it.

We nailed our first centerline with a 7.5, and proceeded to put in another steady, solid test! 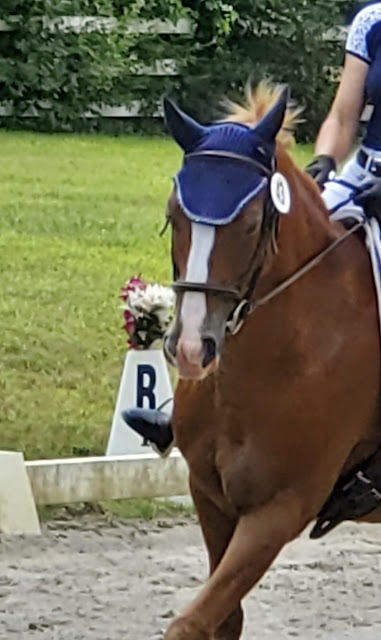 Somehow we managed a very respectable 6 on the first leg yield, and a deserved 5.5 on the second (those drifting haunches, argh!). But about half way through the first one I found myself thinking, "We're doing it. WE'RE DOING IT! This is really going okay!" We scored mostly 6's on the remainder of the test, with 7's for our walk work (and a 7.5 again on the centerline, YES!) and a fairly-given 4 on the simple change. Both Dino and I were BEAT by that point in the test, and the transition was a hot mess. Neither of us had the energy or strength to hold it together, and we fell into a messy trot and picked up the new lead again somewhere near the corner. Ah, well. It was something I was mentally prepared for and if we were going to botch one movement, that was probably going to be it.

To my delight, we scored a qualifying 62.083%, earning our spot in the championship class! The judge commented that the test was very steady and accurately ridden, and that when we were ready, she'd like to see us 'turn up the volume' for more power and expression in the movements. I couldn't agree with her more, and was just over the moon with our first attempt at 1-3!

It feels SO good to be getting confident and competent at First Level, and actually WINNING a class at this level is just... a dream. Not to mention the incredible fact that I'm still showing and having fun on my 21 year old pony who's still kicking ass and taking names in the dressage ring. 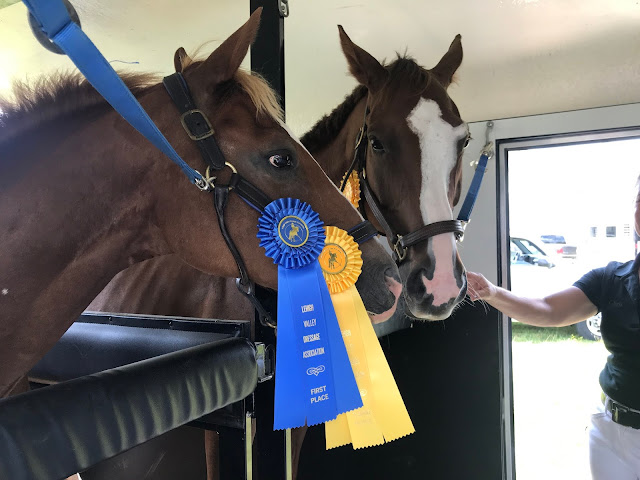 There's nothing better than conquering new challenges with your best friend, don't you think?