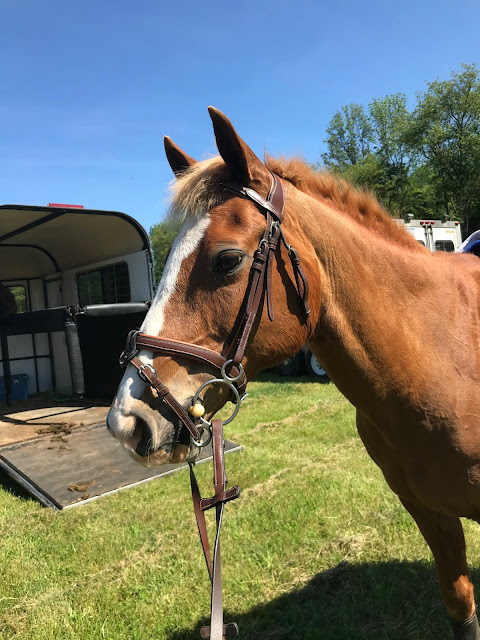 Heading into the long holiday weekend, I was really excited to hit the trails at the Horse Park's hunter pace with a friend! The weather was forecasted to be absolutely gorgeous, and as far as riding events go, there are few things better than a trail ride with ribbons at the end. Dino also officially turned 21 this past Sunday, and I wanted to take him out to do something fun for his birthday.

My friend's horse unfortunately had other plans, and threw his (very fancy custom-wedge-padded) shoe the day before the pace. Everyone was super bummed out, but I decided to go by myself and just enjoy the ride and the beautiful day anyway. Dino is as solid as a trail horse can get, and I'd have no problems navigating the trails solo.

As I was tacking up at the trailer, some sweet older ladies parked next to me struck up a conversation and asked if I was there riding alone. Upon my answer that yes, I was there by myself, one of the ladies declared that it was "terrible" for me to ride alone and asked if I wanted to ride with her and her friends. Of course I couldn't say no, so Dino and I struck out on the course with our new friends!

Given the age of our newfound companions, I was a little worried that the pace of the ride would be too slow for our liking. It was the fist proper trail ride we'd been on this season, and I wanted to get out there and GO. Thankfully, I had nothing to worry about as we hit the first big incline of the course and the whole group cantered boldly up the hill. This would be a FUN ride! 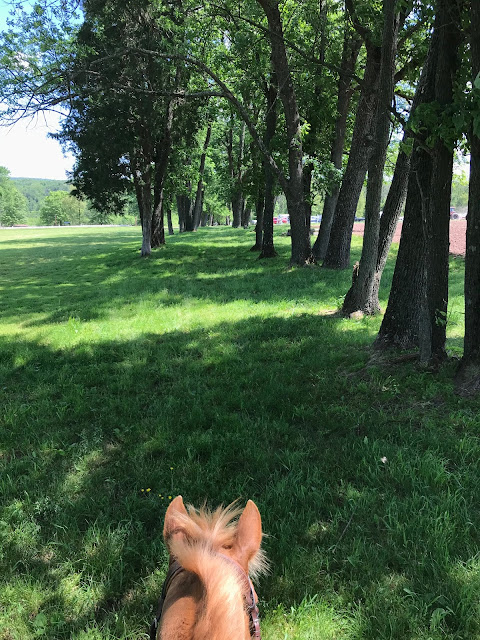 The route of the pace was a bit disappointingly short, probably close to only about 6 miles, but Dino and I had a blast and so enjoyed riding with the kind ladies that had adopted us into their group. We trotted and cantered much of the way, though there was a lot of swampy footing that necessitated walking. Really, it was a perfect early-season outing for horses that weren't quite trail-fit yet.

Dino and I moved into the lead after about 1/3 of the ride, and he led like an absolute rockstar for much of the pace, even giving one OTTB a run for his money during one hand gallop down the trail! Our new friends were impressed with Dino's hidden speed, and like everyone else we meet, couldn't believe he was 21. Dino himself had a fantastic time doing his favorite thing! Wonder Pony even locked on to a massive Training log pile fence while we were trotting through the woods, which amused and terrified me in equal parts.

We finished the pace in good enough time for 4th place in a packed open division, and capped off the day by trotting and cantering some teeny tiny starter fences on the XC course. I have to say, despite not focusing on eventing and jumping as much as we used to, it did feel REALLY GOOD to be back on our 'home turf' course cruising around jumping the jumps. Hopefully this summer will hold a lot more fun outings like this for us!
Email Post
Labels: hunter pace