Back At It: D4K Benefit Show Recap

After nearly a year's hiatus, D-Money and I are back in the show ring! We came out swinging at First Level this year, and after this past weekend's show I'm feeling all the good feels about showing. I'm feeling more prepared for the level than the last time I piloted us around a First Level test and just hoped I wouldn't die, I can't wait to show again, we have the best new show buddies at our new barn, and I'm so motivated to keep working and improving. But I'll unpack all those things in a bit.

If you've been reading this blog for any length of time, you know that there is a certain baseline level of anxiety that sits on my shoulder like some kind of demented parrot. It likes to come with me to horse shows, and it LOVES to hang out and whisper sweet nothings into my ear when I'm jumping. And in the same way that Emma talked about so recently, it manifests itself in the creating of nearly-obsessive-level plans and lists and other little bastions of control. Especially in a sport like riding where so much can go wrong and we have control over so very, very little, being able to carefully orchestrate and painstakingly visualize things like packing, training, memorizing tests, and plotting out the timeline and logistics of the day helps me to feel more confident, prepared, and in control.

And as I mentioned in my last post, I was not able to do many of the things that I usually do as part of my pre-show routine. I usually start making my lists at least a week out from competition day, plotting out my training and preparation plan for the week and carefully writing out lists of gear so I won't forget anything. I plan out Dino's and my outfits - what shirt will I wear, will I wear a jacket, which saddle pads do I want to use? If there is dressage involved, I spend time learning my test until it's burned into my brain, often riding it many times in schooling to commit it to muscle memory and make it automatic. I carefully plan each day of riding leading up to the show - I want to feel as competent as possible in the skills I'll need, but I have to balance that with letting Dino have a lighter workload both mentally and physically so that he feels fresh and ready to perform on show day. I try to take a lesson if I can, and get my trainer's input and guidance. On the evening before the show, I spread out all of my tack on the floor in the living room in front of the TV, put on some kind of weird documentary about aliens or Nazi conspiracies or the Loch Ness Monster, crack open a beer, and spend time cleaning every piece of tack I'll use the next day and focusing on trying to find some sort of peace and relaxation anchored in my preparations.

Pretty much none of those things happened except the tack cleaning, during which I violently whipped myself in the eyeball with the end of a browband, effectively destroying any sense of zen I might have had. I was relatively confident that I knew my test, but I had only ridden the 2019 First 1 test once without forgetting an entire movement, so really it was anyone's guess how that would go once the show ring nerves really kicked in. We'd had a great lesson the week prior, but it wasn't so much a "check in before the show" lesson as a "let's give you a whole new toolkit" lesson. I was exhausted from a week of insanity at the office and two weeks' worth of very late nights spent dogsitting.

I did, at least, know what I was wearing.

Thankfully, it seems that the friend that went to the show with me also has an anxiety parrot. We agreed that we should arrive at the horse park two hours before our ride times, both allotted ourselves two hours at the barn to pack and get ready, and both felt a mixed sense of dread and relief when we saw the show jumping course set up for the next day's CT, praising God that we didn't have to jump anything that day. I can't express how wonderful it was to spend the day with someone who was the same kind of neurotic as me. Neither of us felt rushed or pressured or bent out of shape by anyone else's flying by the seat of their pants, and we worked so well together all day. She and her lovely blaze-face chestnut gelding were truly the best show buddies I could have asked for!

And Dino, bless him, was ready to rock and roll. I was feeling nervous as I got ready to leave the barn that morning until the moment when I led Dino outside to give him a break from standing on the crossties. I had fussed and cleaned and wrapped him, and he knew what was up. Dino trotted out the door, head up, ears up, totally pumped for SHOW DAY! I had to grin and laugh a little - that pony loves going places and he was ready to rock and roll.

So rock and roll we did.

I took a slightly different tack to our warm up this time, taking Dino for a hack around the park at the walk to start. The great thing about the horse park is that the trails and cross country course are right next to the show rings, making it easy to access wide open spaces. I wanted my pony feeling relaxed, happy, and thinking forward, and an energetic walk on the buckle along the trails and fields was just the ticket. Once we got back to the warm up ring to start getting into gear, he was already loose and swinging and starting to think about being on the aids. I kept the in-ring warm up easy and relaxed, just riding enough to make sure all of the buttons that I needed were installed and that Dino was physically ready and mentally focused. I did not get in a fight with him, I did not get super demanding right off the bat, and I really tried to let him tell me what kind of warm up he needed.

It did the trick, and we proceeded to have our best First Level test yet!

I did not forget any movements, I stayed relaxed enough to think through the entire test, and while there were certainly some mistakes made, Dino was there for me throughout the whole thing and recovered well from the bobbles we had. I was THRILLED!

Our first halt didn't start us out with a very good impression, though, as Dino teleported several feet to the right once we got to X. There was a child playing with a very loud toy somewhere to our left, which I think contributed to that situation, but no matter. I was able to stay focused and quiet in my mind and just keep on riding. The 10-meter half circles at the trot went well, and I was able to adjust my ride to be a bit more accurate with each one. In this test the stretchy circle comes right after, which is a tough place for this movement since Dino is often still pretty tense early on in a test. We got some good stretch, but not until the second half of the circle, which lost us some points. The trot lengthenings were just okay - there was definitely a change in the trot, but not as much as I would have liked. The medium walk was not too bad, could have been a little freer and more forward, and again in the free walk Dino didn't truly stretch until around X.

The canter work, though, was a BLAST. Which is something I never thought I'd say about riding canter work on Dino! He was so attentive and so adjustable, and I had a huge stupid smile plastered on my face in each lengthening. He came out of the corner ON. FIRE. and powered down the long side like a champ. We lost a little bend and balance in the 15-meter canter circles, but nothing that can't be improved by more present and tactful riding. Our trot transition came right on the spot at X, which had been worrying me a bit, and aside from a short break in the second canter after the circle when he got tired and slipped in the corner, I was super pleased with the canter work. Because of the break and slip, however, we were a little frazzled coming into the last trot lengthening, and I didn't have the organization I needed to make that happen as well as I should have. Our last halt wasn't 100% straight, either, but much better than the first, and we ended up with a 60.3% under a very tough judge.

Our scores were pretty solid 6's across the board with a few 6.5's, and a 5.5 for the first halt and a trot lengthening (which I thought was rather harsh!) and a 4 for the canter movement where we broke (ouch!) However, we were only 3 points behind the winner of the class, and the icing on the cake was a 7 ON MY RIDER SCORE.

I got a 7. On my rider score. At First Level. From a very very tough judge.

I can now die happy.

We ended the day with a trail ride with our friends, and I can confidently say that it was an absolutely fantastic first show of the season! I left the court feeling so, so happy, proud of my pony, and proud of the work we've been putting in. I feel so much more competent and confident at First than I did a year ago, and I feel that this is an excellent starting point for the season to come. I had such a fun day with our new friends, and am so much less anxious about the idea of getting back into showing after having such a successful outing.

I can't wait for the next one! 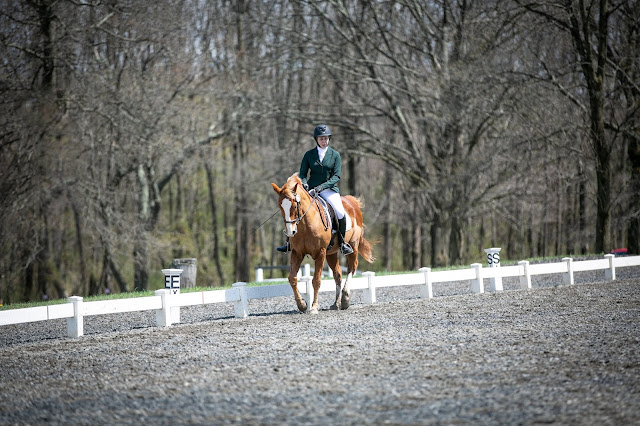