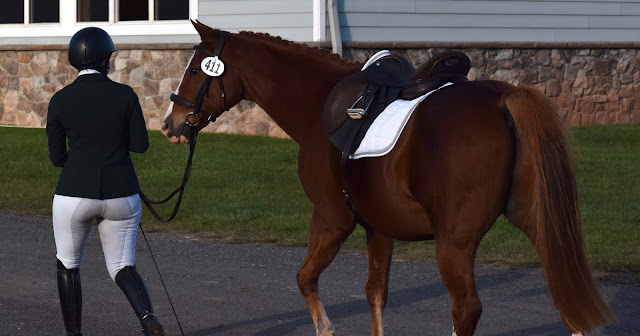 After a summer of fits and starts, Dino and I finally made it to our first rated show at the beginning of October. I had hoped to get to one sooner in the season, but the pandemic is a thing and then we had our bout of soundness/connection problems, so instead of two or three rated outings, we had one this year. Such is horse showing!

I was, as is typical, really nervous prior to this show. My two barn buddies that were supposed to be showing with me both had to scratch for various reasons, and so I'd be headed to my first "real" dressage show by myself. Normally showing alone doesn't phase me, but I was really feeling the need for some moral support at this one! Thankfully, though, I have the very best friends, and Megan met me at the show to lend a helping hand, encouragement, and her photography skills.

Unfortunately, I got the short end of the stick as far as ride times go. I wouldn't be headed down centerline until 5:45 in the evening, which meant a whole day to be anxious, driving the trailer home in the dark, and a really late night at the barn unloading and unpacking.  On the plus side, I also had plenty of time to bathe and braid my pony and didn't have to get up at the crack of dawn, so there were a couple silver linings in that situation. 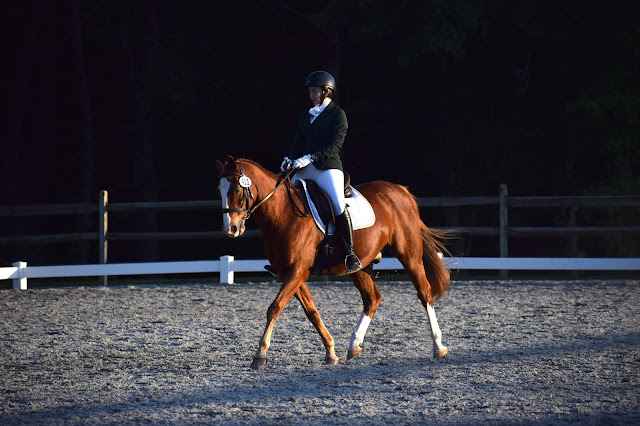 I had decided to ride 1-2 and 2-1, hoping to get two scores done for my Bronze. Our last few rides before the show weren't spectacular, so I was just holding steady to see what kind of pony I had at the show, and do my best. I had come to the recent realization that I didn't need to practice the tests, I just needed to train my horse and ride what he gave me, so I was trying to stick to that thought process and not worry about the movements themselves so much as how Dino felt.

And thankfully, he felt really good! We had some issues in the counter-canter in warm up (I wasn't riding him forward or through enough) but aside from that, Dino felt super. He was moving really well over his back, his balance was up where it needed to be for Second Level, he was responsive and happy and ready to go to work. Feeling that helped calm my nerves so much. My dressage pony had come to play!

However, the sun was also setting by the time I headed in for our first test, 2-1, and it was creating a huge, bright, flame-orange glare on the plexiglass on the front of the judge's stand. We came down centerline facing an ACTUAL FIRE DEMON FROM HELL, and Dino was way more concerned with how to save us from said flaming abomination than, you know, doing the dressage. 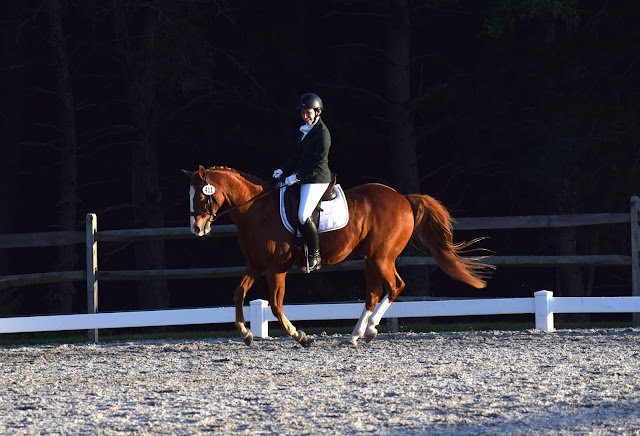 On the bright side, my pony's "spook" isn't so much a "leave the premises immediately" thing, but it is a "become totally stiff, distracted, and unrideable" thing, so the test left a lot to be desired, especially during any movements heading towards/near the judge's stand, which included the shoulder-in and our nemesis, the 10m canter circles, which involved an unfortunate amount of trotting. Ah, well.

We scored a handful of well-deserved 4's and 5.5's for those movements, but a slew of 6's, 6.5's, and a couple 7's in the rest of the work left us with a final score of 59.3%... just 0.7 FREAKING POINTS AWAY FROM OUR QUALIFYING SCORE! That was a bit of a bummer, but even though I had to pilot a stiff, anxious, distracted pony through our test, we had just survived showing our first rated Second Level test, and I was thrilled!

I was also honestly super happy with the fist medium trot in the test, our halt and rein-back, and our left lead walk-canter depart. In those moments Dino was focused, through, and going like the fancy dressage pony he is. The judge commented that we are a, "Capable combination" but the "horse not quite honestly on the aids today," which I 100% agreed with. We were definitely not working at our best, but that first test was out of the way and I was still so, so proud of my pony! 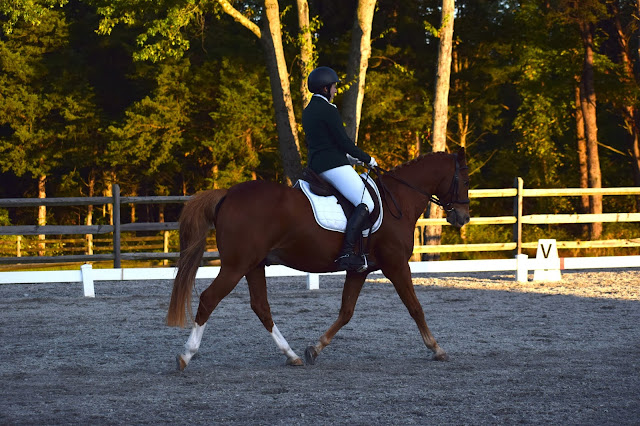 After a short break we headed in for 1-2, and after having finished our more difficult test, I was definitely a lot more relaxed in this one, which showed in our slightly higher scores. Dino was tired at this point though, and still really upset by the fire demon in the judge's booth, so we still had our dicey moments in the First Level test as well. Overall, he was still super tight in his back and not moving softly through his body, and I had a lot less energy to work with than in the Second Level test. I also definitely should have body clipped him before this show, so he was hairy and hot and sweaty, which didn't really help with his energy levels! The leg yields are also SO LONG in this test, which totally caught me by surprise as I started just flying steeply sideways and was almost at the rail WAY before I should have been!

But again, this test had its good moments, and they softened the blow of the ugly bits to earn us a 60.7% and our first Bronze Medal score! It wasn't everything I had hoped for, but it was still one small step towards my goal. 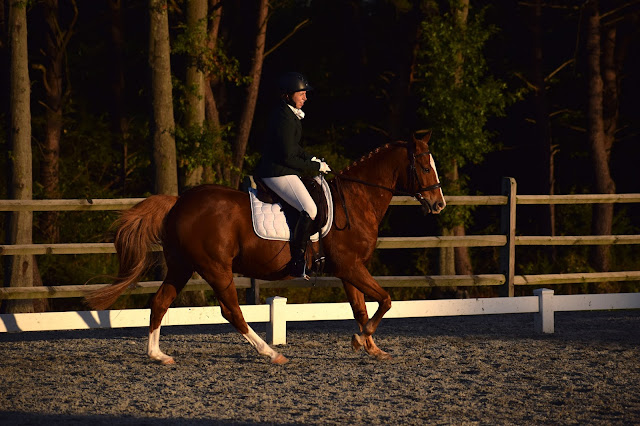 Was this show the best performance of my life? Absolutely not. I was nervous, my horse was nervous, neither of us were working to our full capacity, and our scores were honestly not great!

Even so, I am still so incredibly proud Dino and myself. It was an amazing feeling to go to a rated show at a fancy barn and feel like we belonged there, like we had the training and the quality to show up and compete at this level. It's something I honestly NEVER thought I would do, especially NEVER with Dino, and the fact that we went out and showed First and Second Level at a rated show at all is just a huge accomplishment for us as a team. It proved to me that we aren't "just" a backyard pair, we don't "only" do schooling shows because we "aren't good enough" for rated, that we are capable and good enough and trained enough to show at this level, even if we aren't winning. We didn't light the world on fire, but I was still so pleased with having had the guts to do something that had intimidated me for a long, long time.

And at the end of the day, I'm just happy to be here. 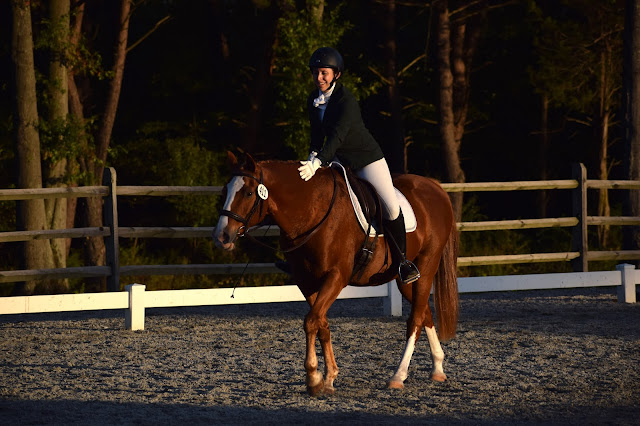