Guns and Ships: A Lesson Recap

I was nervous about our August lesson. Dino had, as I discussed at length, not been feeling great. After our disheartening show, vet visit, and subsequent new medication regimen and bit change, it felt like a lot of things were in flux. In the week leading up to the lesson, he'd also had a week completely off while I was sitting on a beach trying to forget that society as we know it is imploding. (Maybe for the better? That's a topic for another day...)

So, in short, I had no idea what I'd have by the time lesson day rolled around.

Thankfully, Ashley's plan for everyone that day was something I really needed!

I told her in the beginning of our session that I wanted to spend most of our lesson working on myself and accountability in my own body. In bringing Dino back from being very physically uncomfortable, I had noticed that in my attempts to keep a connection with the bit, instead of pushing my pony up into the contact with my leg and seat, I was just pulling my hands backwards until I felt the bit, which is... extremely counter-productive. In addition I generally always fall back on my old habit of over-using my leg whenever things go wrong, so I could always use reminders in that area as well. 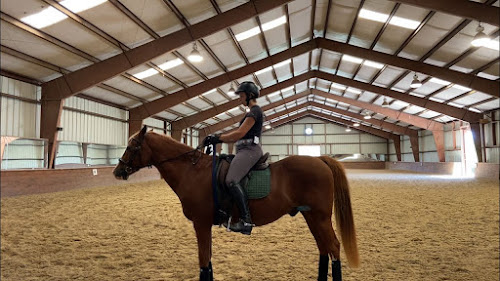 Enter The Polo. Ashley ran a polo wrap underneath Dino's belly right in front of the girth, and had me hold the ends in my hands along with the reins. While riding with my reins and the polo short enough that my hands were on either side of the withers, I was to pull UP on the polo as if I were doing a bicep curl at all times.

This accomplished a few things: it stabilized my hands to give Dino solid, consistent contact to move into, it activated my core, upper arms, and lats, it pulled my seat down deeper into the saddle, helped my pelvis tilt up in the front to ask for more collection, and kept me from pulling my hands back. It also put pressure on my pony's sternum, which was a good reminder for him to lift his wither.

It also made me REALLY SORE, which is generally a sure sign I'm doing something right.

When we first started getting going with the polo, Dino was NOT A FAN. Suddenly I was so much more stable and solid, he had this THING pushing his belly up, and there was really nowhere for him to escape working correctly into the contact except for inserting his ears into my nostrils and getting way behind the leg. After a little time spent getting him forward and not compromising my body by pulling up on the polo and keeping the contact solid, he acquiesced and suddenly I had my 2nd Level pony back! We focused on getting him to bend more through his body while I rode his withers UP through my hands, which thanks to the polo were forming two steady rails that I felt like I could ride his wither in between. It was the first time I had felt him go that through and uphill in a long time, and it was so encouraging to feel. 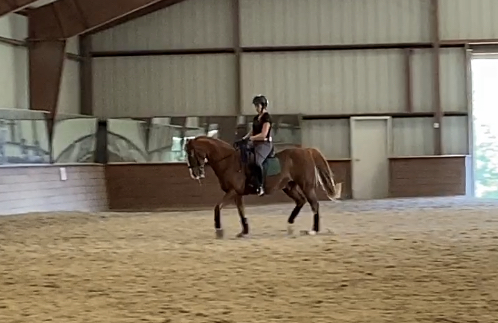 After getting us both acclimated in the trot, we spent most of the ride in canter, starting with a little bit of forward-and-back followed by counter-canter.

Using the polo really helped me be aware of my habit of stopping the movement in my seat and popping forward out of the tack (Half seat is my happy place, okay?! That many years of jumping training just don't go away.) when things in the canter got difficult. I was able to pull myself back down into the saddle where I belonged and keep the whole thing going with my seat. In counter-canter we again focused mostly on Dino's alignment, keeping his neck straight and body bent correctly instead of bent in the direction of the lead he was on. This is, I freely admit, a "me" problem rooted in my fear that he will break or swap if I don't hold the counter-canter with everything I have - counter bend be damned! He felt pretty good in the canter lengthenings as well, but again it was on me to keep the balance up instead of letting him get too long - which for us is the difference between a killer 2nd Level medium and an okay 1st Level lengthening.

That brought us to the meat of this session: half halts in the canter. My current white whale. Until I really figure this out, it's going to be the heart and soul of my riding for a long, long time.

The problem, as was deftly pointed out by Ashley, is twofold: my timing in the half halt is haphazard, and Dino's response is half-assed. 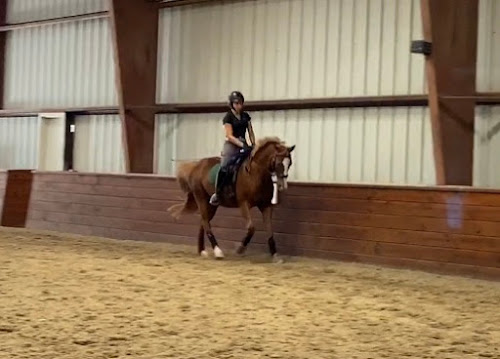 Practicing my timing came down to recognizing that the half halt in canter is MUCH, MUCH QUICKER than I thought it was. Often by the time I was finished with the cue, Dino would already be in the downbeat of the canter, and I would end up reinforcing that moment instead of the upbeat, thereby just making him longer and lower in front, which is exactly the opposite of what we want the half halt to do. In a schooling session after this lesson with insight from Austen, I figured out that if I start the half halt while Dino is in the downbeat and his neck is dropping away from me, by the time my body is saying "pause here for a moment," he's lifting his front end up into the upbeat of the stride.

Dino's responsibility is to shift his balance when he feels that cue - to tuck his cute little pony butt further underneath him, lift his chest, and push up through his wither. Many, many times, this just straight up doesn't happen. Nothing happens. Well, nothing happens or he gets even flatter. Instead of responding by making the canter fluffier, bouncier, shorter, more "Pepe LePew", I'd be getting dragged around in a flat, icky, decidedly un-lofty gait. As you can imagine, this makes collecting for a canter-walk pretty much impossible.

To remedy this, we forced the issue with really hideous canter-halt transitions to explain more clearly to Dino that, YES, when I give you the half halt cue you need to tuck your butt, lift your shoulder, and BOUNCE like a happy little cartoon skunk. My timing on this also wasn't great, but it did help get the point across that I needed Dino to shift his balance back, NOW, and we did manage to improve the canter-walk a bit by the end of the lesson. It was really tough work, but I felt like we were finally back on track after a couple months of everything really falling off the rails.

Overall, Ashley was pretty pleased with where we're at. She said that the quality of the gaits is still there, and still quite good, which was a relief for me to hear. A lot of this lesson was all about consistently raising my standards - for my position and aids, and for Dino's response. Several of our first canter departs earned a, "No. Not good enough. Again." from Ashley, and deservedly so because I didn't take the time to make the walk good enough before I asked for the canter. Riding my pony to the highest standard I can in every movement and every moment is the key to progress, as difficult as it is!
In the couple weeks since our lesson I've been busting out the polo every few rides, and working diligently on schooling the half halt and practicing my timing in the canter aids. I also spent a VERY productive ride working on taking apart the lateral movements step-by-step, and for the first time I felt that Dino REALLY understood the haunches-in! It was encouraging to have some success there. The work is hard, it's not pretty, and there are definitely days where I stress out my pony and make things worse for a ride or two, but all the same it feels good to be back at a point where we're digging into the work and making improvements instead of struggling through the basics and fighting tension, pain, and anxiety.
We're back, finally, and I just hope we're going even better by the time we hit the centerline at our first rated show in October!
Email Post
Labels: dressage lesson