Ashley Madison Returns: Learning To Ride the Horse I Made

Finally, FINALLY, Ashley was able to come back for a day of lessons at our farm, and did I ever have a lot to show her!
Dino has continued to blossom and transform into a very legit dressage horse, and the pony she saw five months ago in January is definitely not the same pony she saw this past weekend. I worked hard during our break from instruction to make him infinitely more strong, fit, and rideable, and I was so excited to show Ashley our progress and get help riding the absolute beast I had created.
My main struggle has continued to be the lateral work. I never really learned shoulder-in and haunches-in well, or correctly for that matter, and I asked Ashley to help me make sure my aids were correct and clear so that I could move forward in making these movements more consistent, correct, and reliable.
After a quick warm up, I demonstrated my sorry excuse for a shoulder-in and described my aids, and Ashley proceeded to completely tear it down and build it back up.
It was exactly what I'd hoped for!
It turns out that what I had been doing (bringing my inside hip up and forward and turning my shoulders and chest towards the inside) was completely wrong. Which definitely explains why I have not been getting good, consistent responses to those aids. I was also trying to pull Dino's shoulder off the rail with my inside hand, which... really wasn't working.
Instead, Ashley had me stretch my inside leg down and use it to press-release at the girth to create bend - the same bend we'd need on a 10m circle - and lift the inside of Dino's ribcage. When he responded, I could feel him rebalance laterally and stand more upright. Once bend was established, she then had my "push [my] entire outside self into him." So that meant engaging all the muscles on the outside of my body - lats, abs, upper leg, knee, etc.  to guide Dino's shoulders off the rail. It wasn't so much about twisting him off the rail as it was pushing him from the outside with much less bend through the neck than I thought I needed -just a turn onto a 10m circle, except we kept going straight! If I got a poor response, as usual the answer was to stop and ask him to yield away from my outside leg, just ingraining the sideways response.
We worked on building the response at the walk in both directions for quite a while, and it was exhausting for both of us! That said, it was intense work I couldn't have accomplished a few months ago. Dino has become so much more rideable, and I'm able to move his body parts individually so much better than I had been in the past. It was hard work, but I could see his understanding of the aids developing as we slowly, calmly reinforced it. Ashley also had me try a gentle whip tap directly behind my inside leg to quicken Dino's hind end, and that worked really well! It gave me more activity in his hind legs without the tension over the croup that can come with tapping on the rump or loin area. It's definitely a technique I'll keep in my back pocket. I had Ashley give me a quick rundown of the aids for haunches-in as well so I could continue developing that one on my own.

During our break before the canter work, we had a short chat about rider position and the importance of having the pelvis in the right position vs. having the legs "perfectly" positioned in alignment. Ashley wanted me to focus more on keeping the bowl of my pelvis upright by engaging the muscles in the front of my torso, and allow my legs to hang from it in whatever spot was natural, vs. trying to keep them back and "aligned" which sometimes led to me having my legs TOO far back and scrunched up. She also had me drop my stirrups half a hole, which allowed me to feel that the reason I wanted them shorter was that I was too tight in my hip flexors. Once I did a little stretching, my leg dropped down just fine and I had no issues with losing stirrups or anything. I'm still riding in a borrowed (though very lovely!) saddle at this point, so it's not 100% ideal in every way.
After the break, I showed Ashley a bit of where our trot work was at (she was very pleased!) before she had me pick up the canter.

Guys. Remember the really really great collected canter we had back in January? IT GOT BETTER. Ashley was positively BESIDE HERSELF when I showed her the canter, declaring that we "could go ride a Third Level test right now!" with how good it was. She could not get over how the quality has improved, how lofty it got, and just how really fantastic Dino's canter has gotten. She had me ride counter-canter left, which is Dino's more difficult direction, and the little man showed up and KILLED IT in that movement, making nearly a full circuit around the arena in great balance.

Then I tried to ride a simple change through the walk and everything fell apart. Ha!
My timing, again, for the canter-walk wasn't spectacular, but the difference now is that I can FEEL when I miss the moment! I can also feel when the canter isn't fluffy enough up front with enough energy to ask for the walk, which is definitely a big improvement in my understanding from a few months ago. Ashley helped me get the canter in a better place and really ingrain the feeling of a lofty, energetic collected canter that I'm able to ask for the walk from. She also reminded me that the transition should come in a moment when there is ZERO pressure on the reins, which was something I had started figuring out on my own, so it was good to have her reinforce that. I got an acceptable transition going each way, but I definitely have some more homework to do on that movement before it becomes confirmed. Ashley wanted me to think about teaching Dino to lift his chest up when I half halt in the canter, and reinforce that response until I'm able to get it all the time. 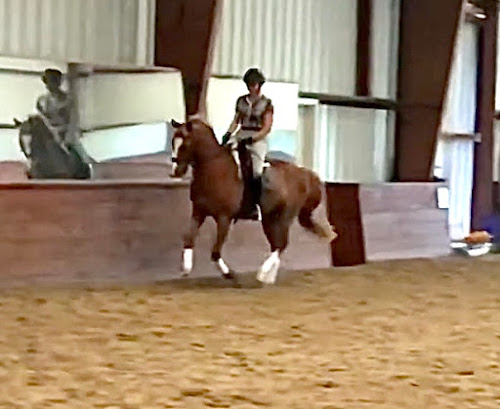 But wait, there's more! I have even more homework to do on the canter - working to expand the range of collected - extended canters at my disposal. Ashley described the canter as existing on a scale from 1 (pirouette) to 10 (big huge extended canter). I have a range of about 5-7 or 8 right now, but we can begin expanding that, especially downward into more collection. She said that there's no reason Dino can't have a proper pirouette canter installed by the time she comes back next month, and I gladly accepted the challenge! I'm to start working on bringing the canter back into a more collected range, letting it out a bit, then back down, then out, ad nauseum until I have more accuracy and range in the types of canters I can get from Dino. It's definitely a deficiency I've noticed in his adjustability, so I'm glad to have an excuse to work on this exclusively.
We also talked about putting Dino in a double bridle to start my education in using one. The thought process here is that I have an incredibly forgiving, easy-going horse who will likely have no qualms about this new equipment, and while we don't need a double at this point, it's as good a time as any for me to start learning to ride in one. So, Operation Build A Double will be in effect shortly! We'll start by just hacking out at the walk in it to get Dino used to packing two bits and me used to handling two sets of reins, and then go from there. I was startled when Ashley first suggested it, but after talking about it more I agree that it's as good a time as any to learn about riding in a double! Other equipment suggestions included a set of EquiBands, which are designed to encourage the horse to lift and engage their thoracic sling muscles as well as really use the hindquarters. I've known several friends who've used these and been thrilled with the results of their horses' improved fitness, so it's something I'm definitely interested in looking into as we get into more difficult work. I'll do anything to make my pony's job easier. Ashley also commented that my plain browband was definitely not sparkly enough, and a set of bandage liners would help Dino look as fancy as he's become! Perhaps a pony with a "very special" canter needs a very special sparkly crown...

And Dino, bless him, was an absolute champion for the whole difficult lesson. He stayed with me mentally the entire time, trying even when he was tuckered out. He was engaged, happy, and interested in the work throughout the lesson, showing Ashley just how much dressage has improved his working life and how well he's taken to it. I firmly believe our training over the past several months has added years to his life, and he's honestly the strongest he's been in the ten years I've owned him. I'm so, so grateful for all we've learned with Ashley and the way she turned my training philosophy around. The simple concept of showing the horse how to earn praise and be successful by breaking things down into smaller pieces has improved my relationship with Dino so much, and he's absolutely thriving. I've had passing thoughts of trying for my scores at 1st and 2nd for my bronze on this pony, but now maybe I'll just go ahead and get the whole darn medal on him.
Email Post
Labels: dressage