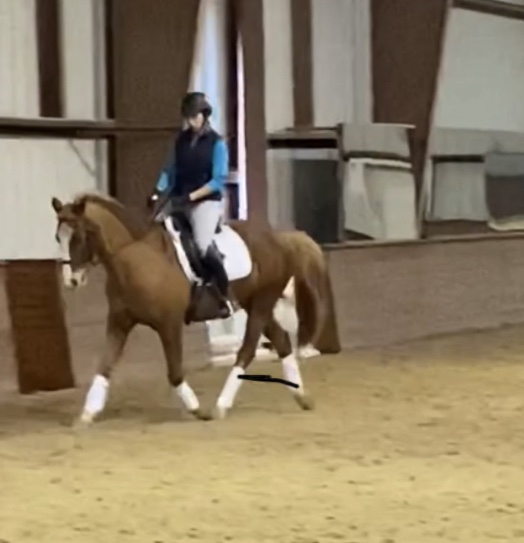 As mentioned briefly in my last post, shortly after our last lesson with Ashley in October, Dino went and got himself a big ol' nasty hoof abscess in his left hind foot. I, naturally, was 90% sure he had sustained a horrific career-ending injury and I would have to retire him and amputate his entire leg.

But. Uh. It was just a really big abscess in his heel, which he very clearly pointed out to my vet, my barn manager, and I. (Thanks for talking me off the ledge, my friends.) We wrapped up his foot, the abscess popped in three days, and Dino was right as rain in no time. Even though he wasn't out of commission for very long with the abscess, between it and my insane schedule he had a solid week and a half off between lessons.

Because of this, I ended up putting him back to work only a week before our lesson, and had just managed to convince him two nights before our clinic ride that yes, he could weight his hind legs again, and no, I was not responsible for holding up his entire front end with my hands. While he was definitely sound and feeling a LOT better, he wasn't going as well as he had been a month ago, and I sort of just mentally threw up my hands and accepted that the lesson would go however it would go. It wasn't a show, and after all, Ashley was there to help me solve problems. If Dino and I weren't up to the same level of awesomeness as we were the month prior, it would be ok.

And as I expected it might, things started out kind of not-awesome. Dino was sticky and grouchy and felt like a 2x4, not a fancy dressage pony. I explained to Ashley that we'd had a big chunk of time off and he wasn't really feeling it so far that day, and she sent us out to loosen up at the trot. As is usually the key to unlocking Dino's work ethic, we worked on getting him light and forward off the leg with little-to-no contact, making big loopy figures and asking him to get his blood pumping a little bit. Thanks to Swishy Whip, I was able to get him thinking more forward, and after a loose-rein canter in each direction Dino was feeling much better. 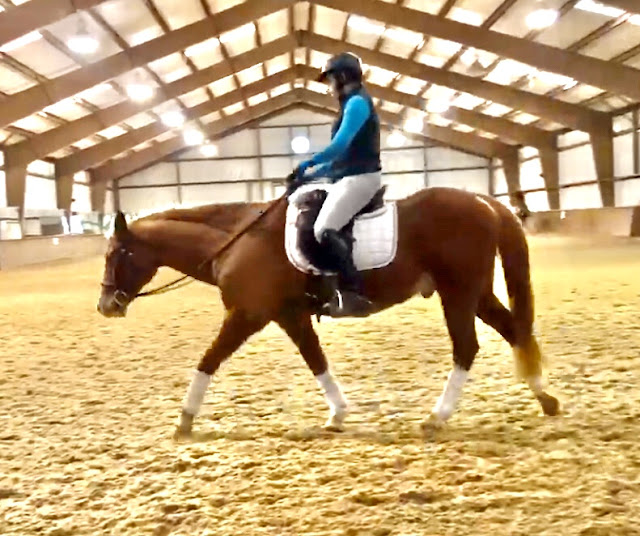 During out warmup, Ashley reminded me to keep my toes rotated in and my heel out of his side, and mentioned that anything I can do to get his neck stretching out and his head down would help with the forward. When he gets tight and upside-down in his neck, he locks up his entire topline and it really blocks him from moving forward. I'd never thought about it that way, but upon musing over it later, I recalled how much better, looser, and more forward Dino feels when he's in stretchy trot vs. when he's putting his ears up my nostrils and resisting my requests to move with everything he's got. Definitely some food for thought and something I'll be thinking about the next time I encounter resistance to the forward aids!

We worked mostly around on the rail and occasionally over a couple ground poles, with Ashley asking me to build the trot up a little more every so often as we traveled around the ring, giving Dino a chance to increase his power in a stepwise fashion. It was really tempting for me to let him drop the tempo way down on the short sides, but Ashley wanted to see the trot still building even in the corners. And as per usual, the name of the game was getting a big response from a light leg aid, reinforcing with a sharp kick or Swishy Whip when necessary. We got a few really lovely, elevated, powerful steps especially to the right, and it was great to have Ashley there to reinforce what I was feeling and remind me to make a huge fuss over Dino when he offered it!

Before tackling the next thing on the list, the walk-canter-walk transitions, Ashley wanted me to supple Dino a bit more by asking him to release the base of his neck by flexing him to the inside and asking him to really step away from the inside leg in his ribcage. This was honestly way harder than it should have been. I felt like I just wasn't getting any kind of response to my inside leg and my attempts to flex Dino's neck just served to pull him off the circle to the inside. We did make some improvements, but getting a better response to the bending aids and helping Dino release the base of his neck is definitely at the top of my list of things to work on over the winter. Big things to remember from this exercise are to RELEASE my inside rein when he flexes - don't hold him there! - and to use an upward-sideways rein aid - never backwards. We also included a few steps of leg yield here and there to assist in the suppling, which still needs some help but we're improving!

Then came the canter work.

Y'ALL. THE CANTER WORK. I'm going to say right now that this was probably the absolute best canter work Dino and I have ever done in our entire lives. It was, without a doubt, absolutely magical, and one of those rare occasions where the video looks as incredible as it felt. I felt like I was riding a very, very fancy dressage horse, and IT WAS FREAKIN' AWESOME!

And it didn't come from anything crazy, no weird techniques, just reminders for correct riding building on all the work we've done on straightness in the canter and increasing response to the leg aids that began in our first lesson over the summer.  We picked up the canter, Ashley asked me to carry the rhythm with my hips and add more "jump" with my leg at the top of the stride, and HOLY WOW Dino transformed into the upper-level dressage star of my dreams! He was the most elevated, lofty, powerful, straight, balanced, collected, round, amazing he's ever, EVER been. I simultaneously didn't want that canter to end and also wanted to drop back down to trot so I wouldn't mess up the absolute perfection of the canter. But as we schooled the walk-canter-walk, Dino continued to step into this Magic Canter again and again and again. I couldn't believe it. I wish you could see my insane, crazy-person grin in these videos! I was having A BLAST.

At one point Ashley commented, "I have nothing to say to you. This is a beautiful canter." Most of you know what a huge compliment it is to have your trainer not have a single thing to change about what she sees!

Best Canter Ever aside, we worked a lot on the nitty-gritty of the canter-walk. God has given me a lot of gifts, and unfortunately rhythm isn't one of them. My timing for the walk aid was really, really off, and Ashley helped me try and feel the highest part of the canter stride, when my hips were forward and upper body back, and THAT was the point at which to use my half halt (core and upper thigh) to collect Dino and ask him to sit more, and then let go in between half halts and let him carry the collection himself.  She wanted three half halts three strides in a row before 200% committing to the walk transition and dropping my seat down to the Earth's core and keeping my upper body back, while believing with all my being that Dino was going to Walk Right Now. Like last lesson, we didn't quite get the seamless, fluffy transition that we were going for, but we got pretty damn close, thanks in no small part to the phenomenal quality of the canter.  The more important accomplishment was that I understood the timing of the aids for this movement a lot better, and can now work on it more effectively on my own.

After some really really great attempts at the canter-walk, we switched gears to leg yields for a moment before ending the lesson. Ashley told me she wanted to see one leg yield each way in sitting trot, and if they were good, we could finish there. Dino heard her loud and clear! As Ashley was describing the type of trot she wanted to see - forward, balanced, round, and carrying - we picked up the Magic Trot. It was perfection - almost as good as the canter! Our leg yield off the left leg we nailed right away, although I could feel that Dino still isn't crossing over as deeply as I'd like. We had to do the movement off the right leg twice as I lost his haunches a bit the first time, but was able to correct it, which allowed Dino to be done for the day. Unfortunately I don't have a clip of these, but trust me they were pretty darn good for us!

In short, I'm just so thrilled with how Dino worked in this lesson! Considering all the time off he had, the abscess, the way he started off stiff and grouchy that day, and the fact that he was just feeling so-so two days prior, I'm amazed with what he did for me. We got so much wonderful encouragement from Ashley as well, garnering another, "Second Level here he comes!" as well as loads of praise for for the improvement we made since last lesson, especially in the canter work. She also said that Dino is one of her absolute favorites to come teach, that she loves him a lot, and we've blown her away with our progress over the last few months. I'm sad we won't get to see Ashley for another couple months at least as she travels south for the winter, but I have LOADS of homework to do and can't wait to dig into it!