Look Ma, No Spurs! And Two Steps Back 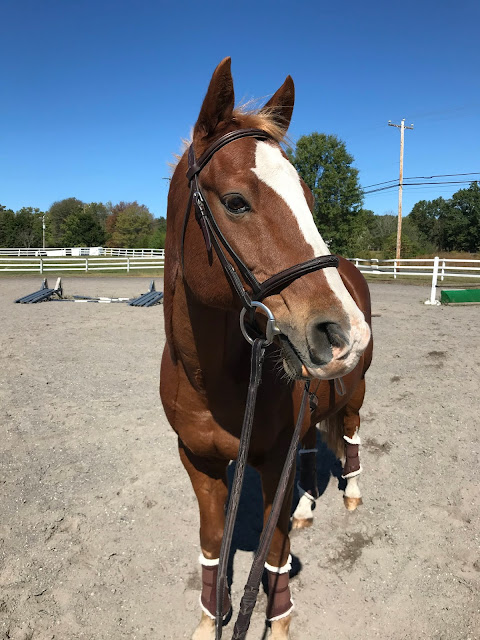 Since August when I started riding with Ashley, I've been doing something that I don't do often at all.

For a long time, I subscribed to the old maxim, "Never go into battle unarmed," and came to each ride dressed for war in spurs with whip in hand. Dino was absolutely a stick & spur ride for years, unless we were trail riding or hunting, and I used both tools just about every ride. But over the past couple months, I've been leaving the spurs in my locker, taking them out only when I felt the bend was suffering a bit and Dino might need a little reminder.

And overall, it's been going great.

Dino's really loving this whole riding-with-my-legs-off thing, and I feel like a kinder human being without poking my pony in the gut every other stride. We're improving the way we work together, and I think it feels really good for both of us.

But of course, like every good thing, it isn't all butterflies and rainbows, and over the past week we've had a bit of a setback in the Go Button department. I schooled Dino western a couple days in a row so that a friend who is a beginner rider could hop on and mess around, and wanted to re-install the "low & slow" mode for her. (How amazing is this horse that he can go from dressage and XC powerhouse to beginner western pony?! The most amazing.) And in my rush to get him going slow and steady, I neglected our homework for a couple days and didn't address some snarkiness when I should have. So, our rides for the rest of the week were... not great. I tried jumping to get him a little more perky, but it turns out that you have to get the pony in front of the leg BEFORE you jump, so what I planned on being a short hack and a couple crossrails ended up a long, frustrating, sweaty schooling session. Dino was cranky in the dressage work as well, and it seemed like we had just lost our spark.

I realized after a week's worth of rides like this that the old man hadn't gotten a round of Pentosan since the spring, and sore joints might be contributing to our struggles, so I started him on that magic joint juice again and planned a softer, more thoughtful schooling ride.

And as usual, a lot of the problem is probably me.

When I took the time to dial down my frustration and pent-up aggression and explained, calmly, to Dino what I wanted while allowing him space to stretch and think, our most recent ride went a LOT better. I did have to get after him a couple times for not listening to the forward aids, but I also had him moving forward off my seat, happily stretching into the contact, and working with me instead of reverting back to Snarky Pony Mode. We both ended the ride feeling a lot more relaxed and happy!

Progress doesn't travel a straight line, but I think we're getting back in the right direction. Thankfully, we have another lesson in a week to help keep us on the straight and narrow.