Somehow, here we are in mid-September and my local GMO championship show has come and gone! We were in a lot of ways probably not as prepared for this show as we could have been, but we still came out and gave the best we could that day, and came home with a big ribbon and lots to improve on going forward.

Originally, the championship show only required competitors to ride Test 3 for their level, but when it came time to register the rules had changed to include Tests 2 & 3. I had decided after learning how trying a second test was for us at our last show that I would stick to one test a day for the forseeable future, but the rule change caused me to throw that plan out the window. So, we'd have to try and be as fit as possible, learn a new test, and try to balance preparing for competition with cementing everything we'd learned at the clinic just a few weeks prior.

It was a challenge, to say the least!

Toss in a more stressful than usual work week and some lost sleep a couple days before the show, and I wasn't feeling my personal best when championship day rolled around. I'd also pushed Dino past where I should have in schooling during a couple rides, so he was feeling a bit frazzled as well. I was hoping a day off followed by a very light lunging session would set him right. Thankfully, he looked loose and happy on the lunge on Friday night, so I was feeling pretty optimistic about showing the next day.

We arrived at the show, everyone got beautified, and after a nice brisk walk around the park, we headed into the warmup to get that Go Button working. As always (forever and ever, amen) the name of the game was forward and in front of the leg, and I achieved as much impulsion and sensitivity to the aids as I could before our first test, 1-2. Dino didn't feel 110% on, but we were as ready as we could have been.

All in all, it was a very solid test for us, especially considering the championship show was literally the firs time I'd ridden it at a show all season, with only one practice run at home. We scored a steady stream of 6's and 6.5's, with the exception of one 7 on our first trot lengthening, which I think has to be one of our best scores on that movement yet! Most of the comments indicated that the judge wanted to see a softer topline, better use of corners, more consistent bend, and more 'oomph' in general, none of which surprised me at all. I was really happy that Dino was happily going forward in the lengthenings off a much lighter leg aid in this test (Thanks, Ashley!) but I did feel like I let us down a little. I was definitely in survival mode for much of it, just trying to make it through vs. really making each movement the best it could be. But it was still a respectable effort that garnered us a 63.4%. It's good to know we're consistent in our scores!

For 1-3, I REALLY wanted to get Dino hot off the leg in warm up. I knew that a lot of the things that the first judge found fault with would improve with more impulsion. I did a lot of transitions, demanding a snappy response from Dino, and tried to end with some good stretch to help him feel relaxed and like he'd done a good job before heading down centerline again. Our second test would be in front of a different judge because of the championship format, and in a different (sometimes spookier) ring, but again, all I could do was give it my best shot!

This test... was all over the place, and a testament to why I'm not sure we're quite ready to ride two First Level tests in one day, especially with 1-3 being the second test after we're both tired! We started off strong with a 7 on our first centerline, and then 6's and 6.5's for the first lenghtening, leg yields, and 10m trot circle, with another 7 for the second 10m circle. We nailed the stretchy trot for another 7, banging out a 7 for the medium walk and a 7.5 for the free walk. The canter work started out pretty well with a 6.5 for the transition, and then we got slammed with a 5 for the first counter-canter loop because I apparently CANNOT STEER and was so worried about keeping Dino coming forward in the turn at X that I did not actually go to X. We redeemed ourselves with a 7 for the 15m circle and a solid 6.5 for the lengthening.

Then instead of coming back to working canter, Dino broke to trot, earning us a 4. Whomp. I put him back together, vowing to really take my time with the simple change at X and get us back in gear, and then BOTH OF MY CALVES CRAMPED SIMULTANEOUSLY AND I COULD NOT PUT MY LEG ON.

We struggled through the next few movements, I lost a stirrup, my calves were screaming. We earned 5's with the exception of a blessed 6.5 on the 15m circle and a 6 on the lengthening, though I was unable to keep it together to actually make a decent transition back to working canter, earning us a 5.5. Thankfully I got my act together for the last couple movements, earning 6's and 7's.

With all of that nonsense, we somehow still scored a 62.9, putting us in third place overall in the championship divison! 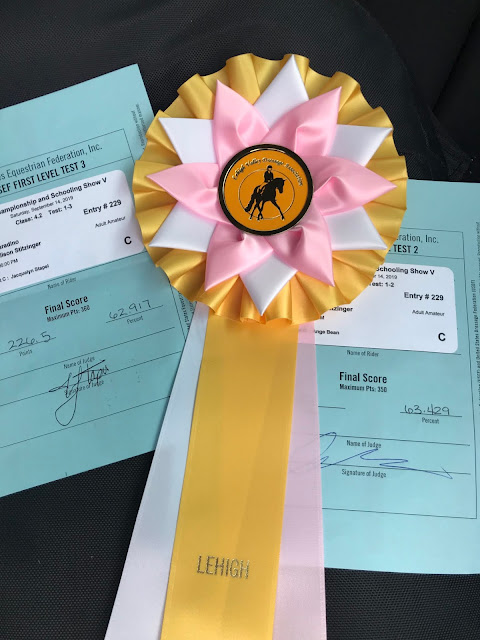 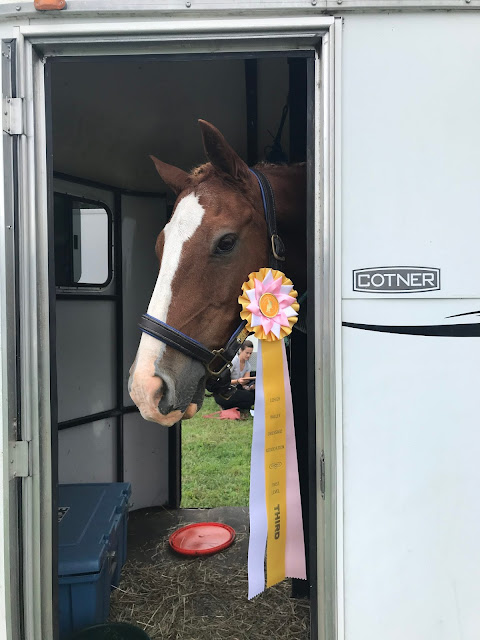 While my riding and resulting rotten scores in the canter work in 1-3 was absolutely disappointing for me, I'm also pretty darn proud of us. We qualified for a championship class at First Level in a test that I thought was an ENORMOUS reach for us in the beginning of the season. The rest of our scores in 1-3 were also really, really solid, and they show me that if we can just manage to be consistent throughout an entire test, we can score SO much better! All the pieces are in there, we've got the skills, it's just about putting them together at the same time to create one beautiful, flowing test. It's exciting to have accomplished something new that I wasn't sure we were capable of, and as usual, I'm even more motivated by this show to keep learning and improving.