In the midst of managing my exploding ear, exciting things have been happening on the bird-filled side of the property. About a month or two ago, Edna went broody. REAL BROODY. For the non-chicken-people out there, "broody" refers to when a hen experiences hormonal shifts that tell her to SIT ON EGGS. SIT ON THEM NOW!! TIME TO HATCH SOME BABIES! It can get extreme.

Edna's dedication to her nest was like nothing I've ever seen. She refused to leave it, and growled like a grumpy, fluffy pancake if I touched her. She was stealing other hens' eggs to sit on them. When she did leave the nest once a day to eat or drink, she went on an absolute rampage. Fluffing herself up, jumping in the air, making insane noises, and giving off a general air of, "Mess with me and I will cut you." She had plucked all of the feathers out of her own breast so that she could put her bare skin against the eggs, providing the perfect degree of temperature and humidity. Edna was 100% devoted to sitting on eggs.

So, I decided to let her keep a clutch of three eggs so she could indulge her motherly instincts and see what happened. Chicken eggs incubate in 21 days, so in three weeks we'd either have babies, or I'd take the duds away and I'd have my sweet, normal, non-broody Edna back. 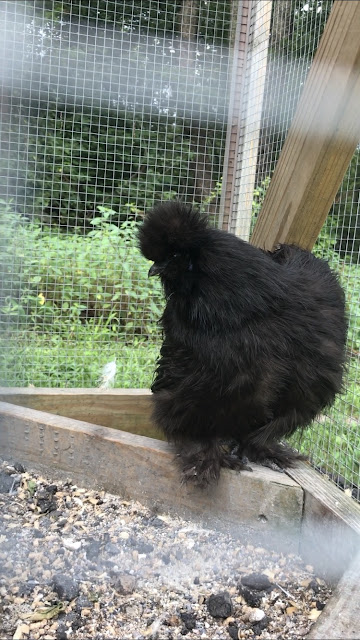 Three weeks later, I picked up Edna to check on her clutch, and inspected the eggs. Two had not developed - when shaken gently, I could hear that their contents were still liquid. I knew one of them had fallen out of the nest early on and gotten too cold, so two chicks was the most I could hope for, and perhaps the other just wasn't fertile. I tossed them on the compost pile, and left the last egg - with solid, hopefully fully-formed-baby-chick contents - under Edna.

The next day, I again picked up Edna to check on the egg and to take away any stolen eggs she might have secreted away. I only saw a broken shell, and exasperated, thought to myself that the last egg must've gone bad and burst underneath her. I was disappointed for about three seconds, after which a baby chick plopped out from under Edna's wing, still wet from hatching.

WE HAD A BABY! And it was the most adorable, tiny, precious thing I'd ever seen. 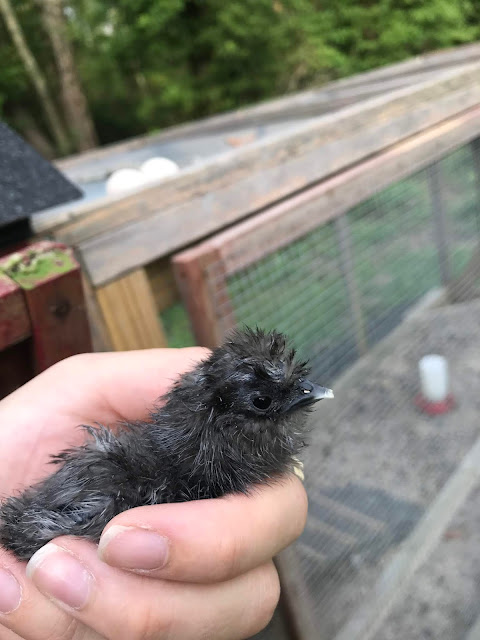 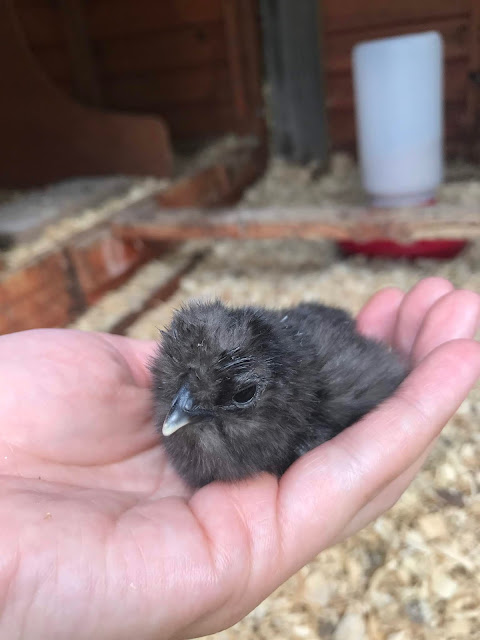 In its two weeks of life, this little chick has grown and changed A LOT. It's gone from a little round fluffy blob to a very active, brave, tall little chicken. It's been so much fun watching it grow and gain confidence and strength, and getting to see Edna in her role as mama hen. 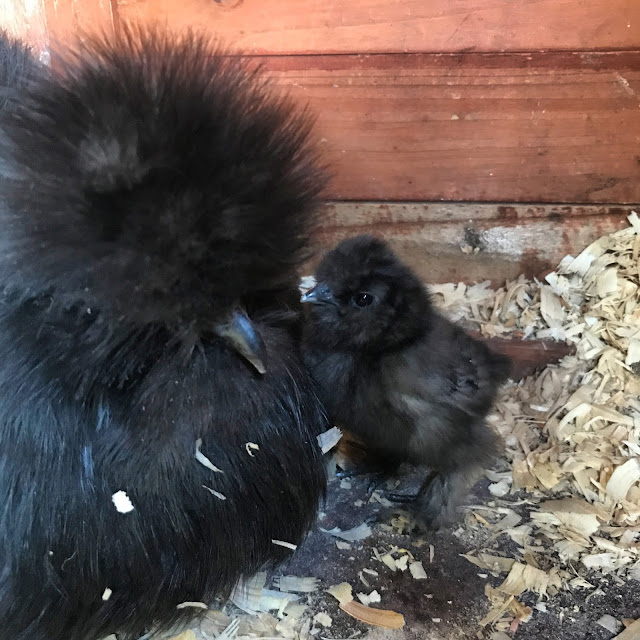 She is so, so good at it. She taught the chick to eat and drink, and how to scratch for food on the ground. She shelters it under her wing when it's time to sleep, and she protects it from every threat. I have no doubt Edna would give her life for that baby if she needed to, and it's such an amazing thing to get to watch. 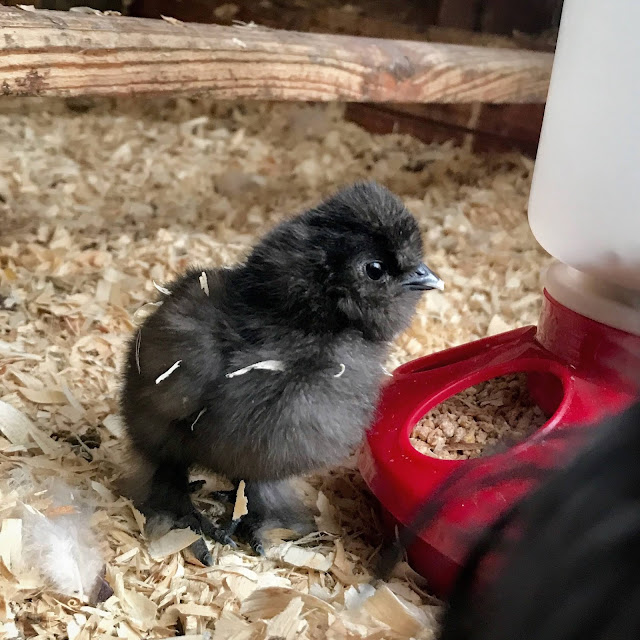 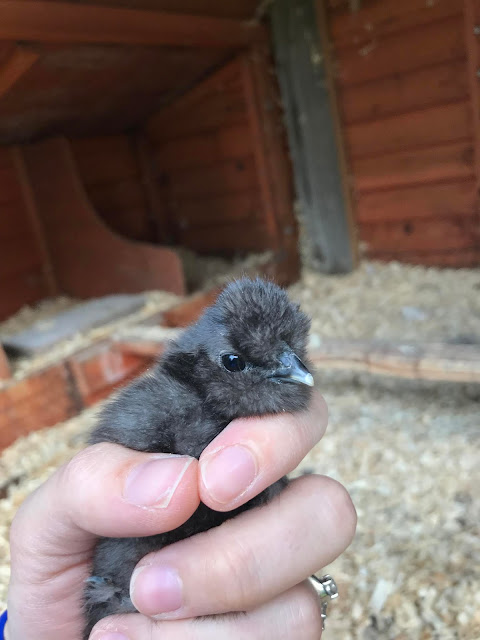 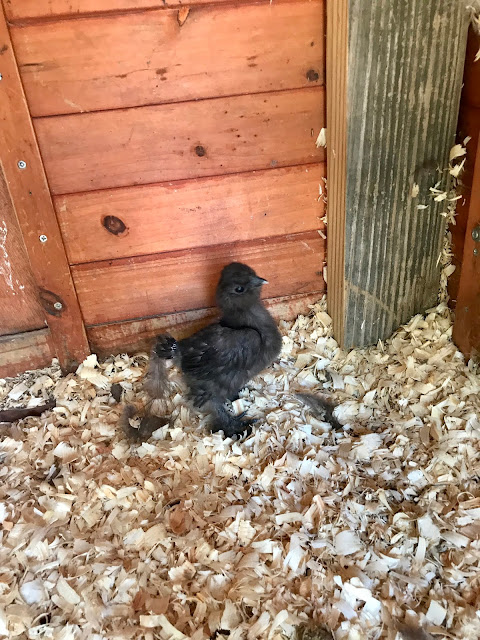 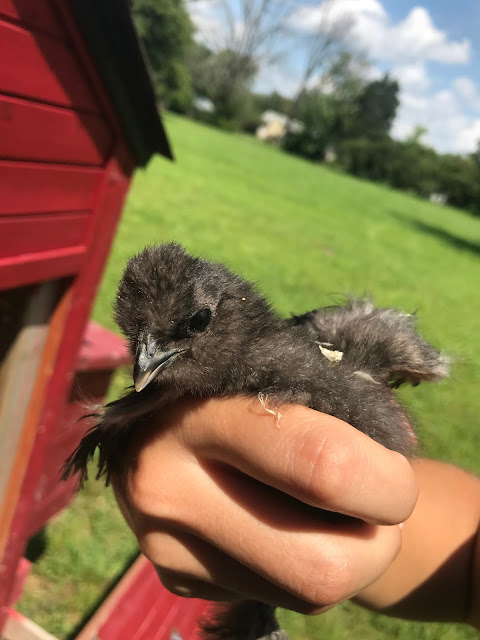 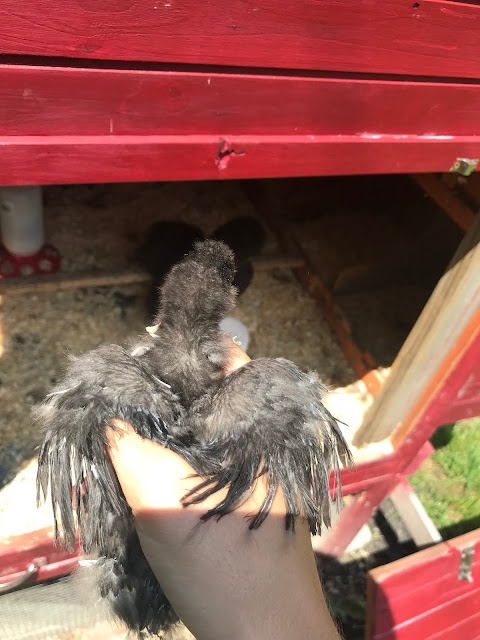 Unfortunately, (as we experienced with Bro-Linda) Silkies are very difficult to sex until they reach adulthood, so I have no idea if Bebe Poof is a hen or a rooster. I'm desperately hoping for a hen, and mulling over possible names as I watch it grow. Either way, I'm really enjoying being a chicken grandma!
Email Post
Labels: chickens