Part the Third: (Happy) Tears
We last left our heroes at the conclusion of a mostly-successful stadium jumping round, headed for the start box with their hearts in their throats, awaiting the sound of the fateful, "3, 2, 1, have a great ride!"

After walking the course, I knew that it would absolutely be the biggest cross country challenge Dino and I had faced all season. The track was long - 15 fences (with one A-B combination at the water) and nearly everything looked to be maximum height and width. A lot of the jumps were set on long, downhill lines, and the red table at Fence 7 was causing me particular anxiety. It was big, and wide, and set slightly downhill in a stand of trees so that it looked like you were jumping out into oblivion. I hoped that the nice, clearly visible path to fences 8 and 9 beyond the table would carry my eye forward enough to keep the table from being an issue. The entrance to the water was also not very friendly, being very steep and a bit narrow. Dino wouldn't be able to even see the water until we were quite close, so I planed to take it slow on our approach, and then trot the B element - a small log stack fence set just after the water. The ditch was also, of course, set at the bottom of a LONG, steepish hill, but Dino would have plenty of time to look at it, so as long as I kept him balanced I figured it would ride okay.

The Intro course was everything we would have seen on a solid BN course, just with slightly smaller fences and lacking a bank. It all seemed doable for us, but we would absolutely need to be on our game to be successful. I was, however, optimistic about the way the fences were set far enough apart to allow the horses to get in a good rhythm and stay relaxed without the jumps coming up too quickly. That, I thought, would work in our favor.

So, with my stomach churning I kicked Dino out of the start box, gave him a solid slap on the shoulder with my bat, and headed towards Fence 1:

He jumped it out of a good, steady canter and then dug in and blasted towards Fence 2, the "Doghouse" (i.e. a coop) 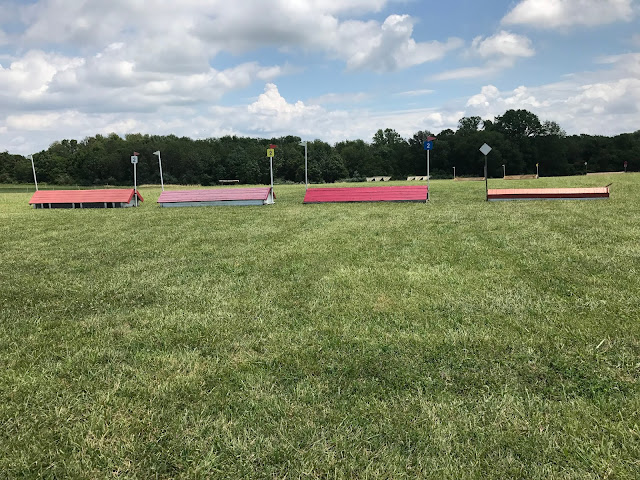 It was at this point in the day that I became very, very glad that I've switched Dino's competition jumping bit to a slow twist. There was a lot of half-halting going on during this course, and it was comforting to be able to take a couple good tugs before each fence to get him back on his butt without feeling the need to hold him back through the entire track.

With his front end lifted up, Dino handily popped over the doghouse out of a good, strong XC canter with nary a care. I made myself breathe. We were, so far, doing okay.

Fence 3 was another coop, this one natural colored instead of bright red. Another couple good half halts to balance him on the long, downhill sloping approach, and Dino easily bounced over out of the same excellent pace. 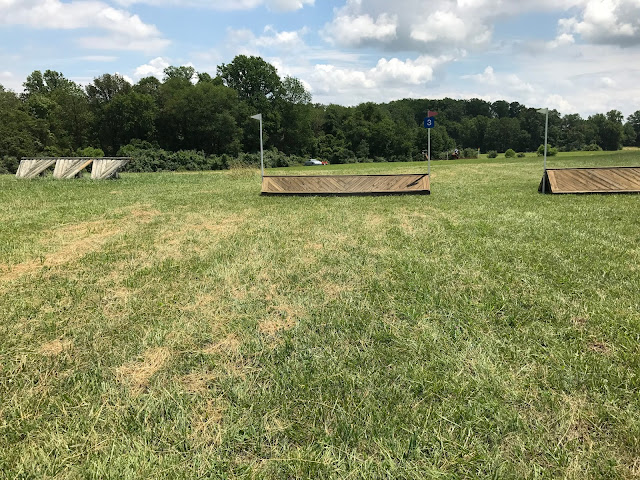 We landed and Dino kept trucking along in a great gallop, listening to my requests for him to balance up before each fence, and tackled Fence 4, a stout box decorated with potentially-spooky hay bales and wagon wheels, without so much as a flick of the ear. 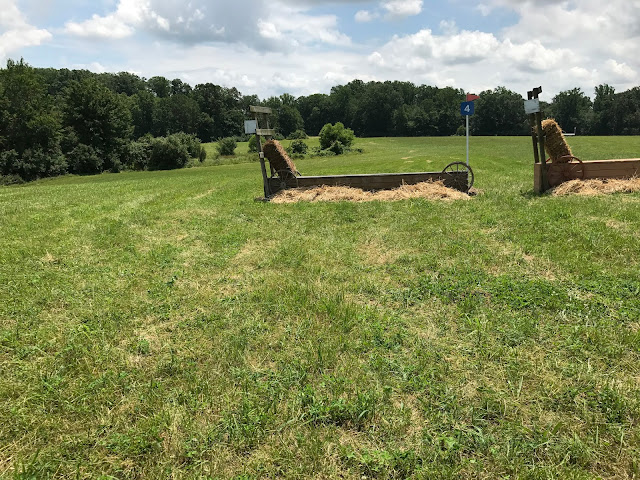 It was at this point that I started having FUN.

I was galloping across a course that would surely test us at a brand new venue and so far answering every. single. question. easily and smoothly. Dino and I made the sweeping right turn to Fence 5, a log set on an uphill slope, and I let him open up his step and cruise on over out of stride. 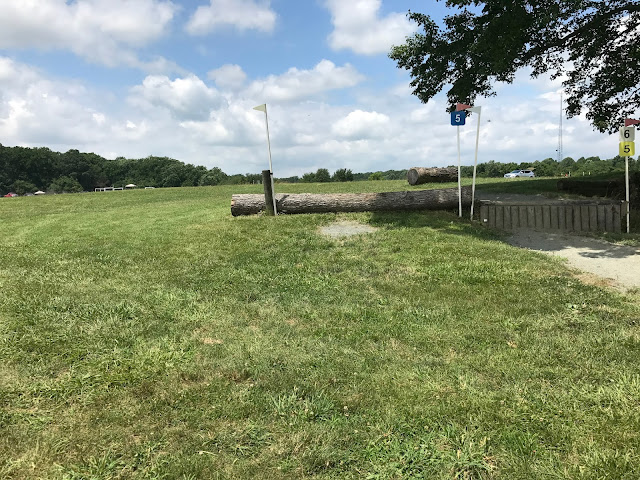 I smiled. We were already 1/3 of the way through the course and it was going GREAT! Dino felt bold and confident and fast, and not at ALL panicked or worried. He was listening to my half halts, jumping everything beautifully, and felt like a heat-seeking missile looking for the next fence.

We cruised down the hill to Fence 6, a cute little rolltop feeder that I had really liked the shape of on our course walk. Dino locked on and jumped it like a total pro. 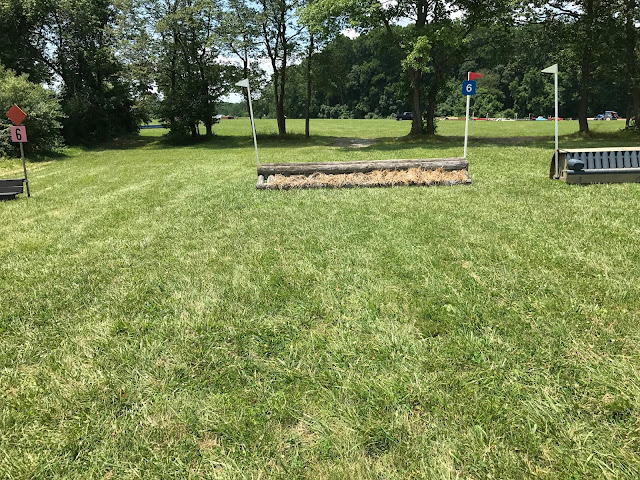 The Big Bad Red Table was next. But, at this point in the course Dino had proven to me that he was in it to win it, we had a great rhythm going, he had jumped every single element with confidence and style, and I was going to give that table everything I had. Dino was picking up a bit too much speed for my liking at this point, so I half-halted hard on approach to get him back up off his forehand and slowed down a little, and rode steady towards the table, keeping my eye up and focused on the ramp at Fence 8 in the distance.

Nailed it. The table jumped GREAT.

Dino blasted off down the hill to Fence 8, but after that table the next two fences felt like a walk in the park. We cruised over the ramp and the little log pile, and headed around to the right towards the water. 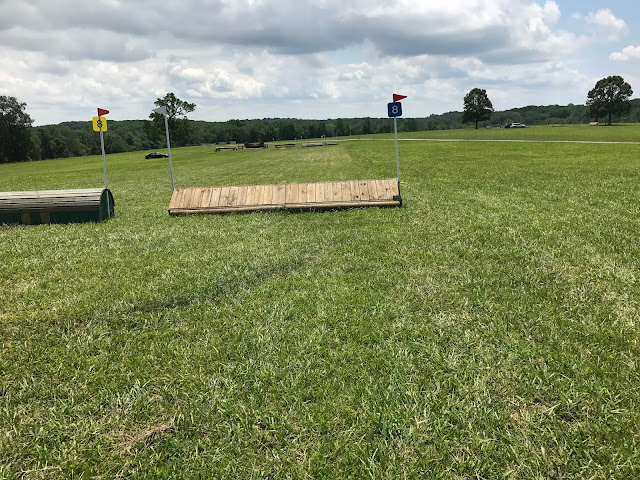 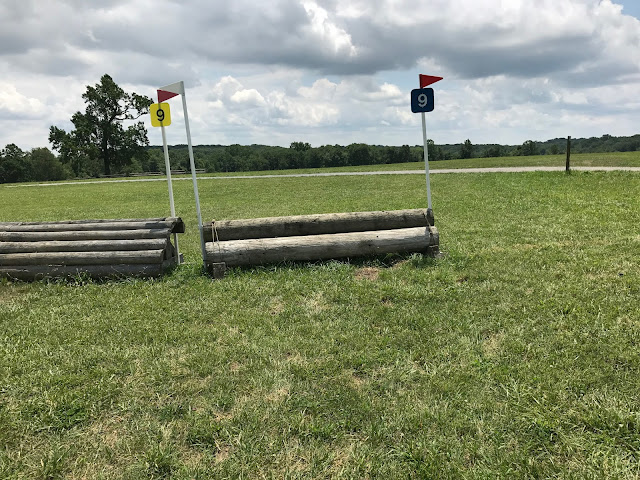 Of course, I missed a photo of the water entrance. Dino slowed to a trot as we approached, wondering why I was pointing him towards a giant crater, and I let him slow further to a marching walk as we headed down the steep entrance to the water. While he definitely seemed to need the processing time to feel confident about the water and a lot of encouragement to keep going, Dino never stopped or spooked or snorted, he just marched right on through and trotted out and over the B element of the water complex like a pro. 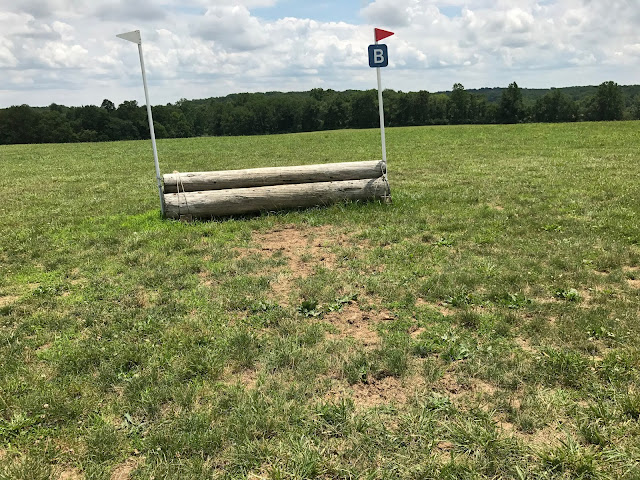 I was feeling awesome about our run at this point, just five more fences and we were home! Dino was on fire and the next two jumps were set pretty steeply downhill, so I brought him back pretty hard for Fence 11, the hay bales, and then maintained a good balance all the way down the hill to the ditch. He jumped both of them boldly and galloped on to the next obstacle like a badass event horse! 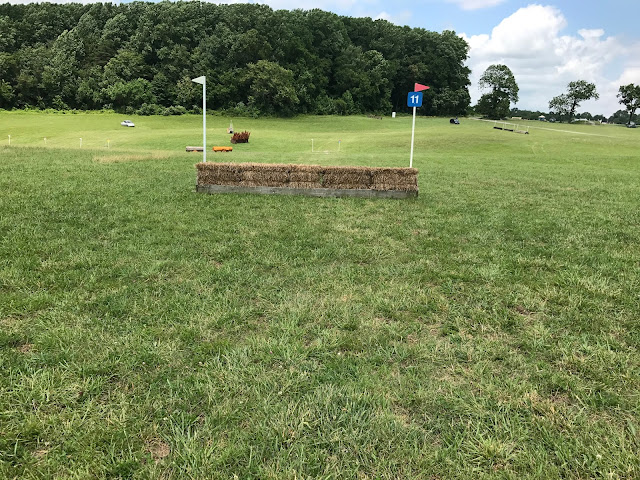 The last three jumps were all uphill, so I gladly let Dino open up and cruise on over the big black box, which was quite stout but surprisingly un-intimidating for me. 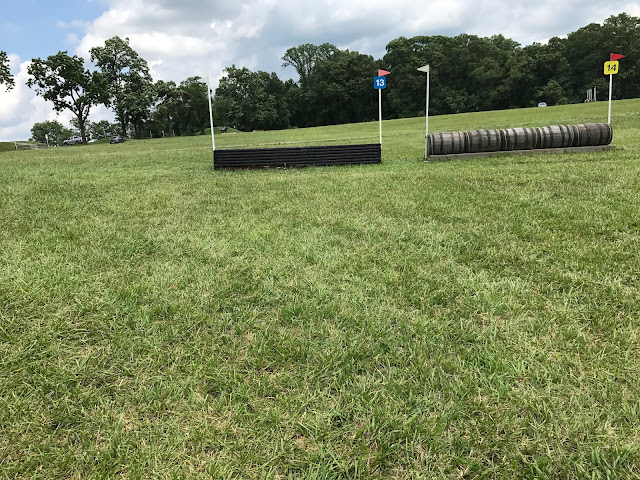 Next to last was the Log on a Lump, which is very similar to the roller coaster that we school all the time at the horse park. I put my leg on, Dino bounded up the hill in five easy strides and hopped easily over the log, and headed home towards our last fence on course! 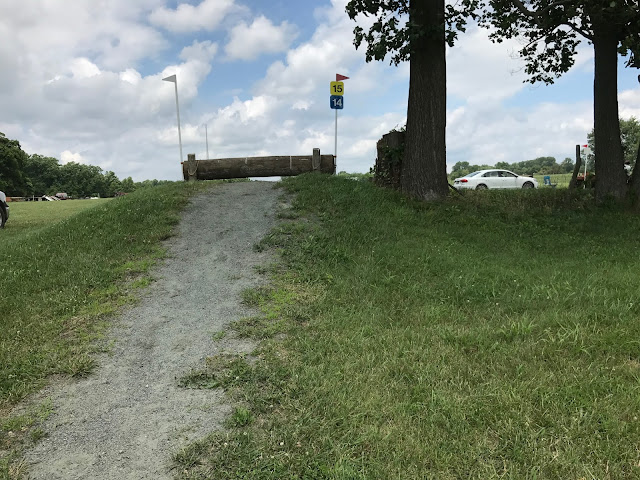 We polished off our first XC run at Fair Hill with their iconic train jump; for Intro it was an easy, wide rolltop. Dino was still trucking along at Event Pony Gallop Speed this point, so I did have to make an effort to slow him down and balance a bit before the last jump, but we cleared it just fine and galloped through the finish flags, PENALTY FREE. 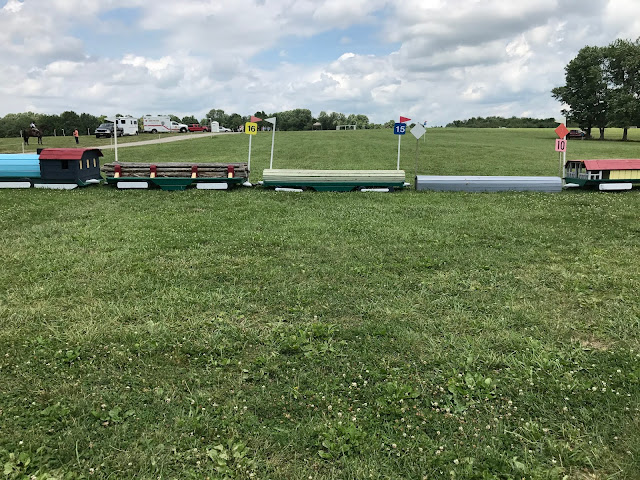 And then the happy tears came.

I hopped off Dino, panting in the humidity and smiling like a damn fool with tears and sweat on my face. For the first time on cross country we had faced a true test of our skills and passed with flying colors. The entire course felt bold and smooth and while not necessarily easy, absolutely well within the realm of our combined capability. I am so, SO proud of Dino for how he ran that day. It's been a long, LONG time since I felt him so confident on cross country: fast without being frantic, careful without being backed off, and game as hell and ready to jump whatever I pointed him at. I felt like I was sitting on a real event horse, and I can't even describe the sense of pride and accomplishment and total joy that comes with that. Dino was, and is, an absolutely incredible partner. To top it off, I was confident, calm, and able to ride in the moment throughout the entire course. Not ONCE did anxiety threaten to paralyze me or did fear come to cloud my mind. I rode like a goddamn eventer, and it was FUN!

At the end of the day, our 4 faults from stadium brought us to a finishing score of 30.8, which shockingly dropped us from 2nd to 5th! I've NEVER been at a show where the sub-BN divisions had such competitive dressage scores and where a single rail could be so influential - I was only a point away from the second place finisher. It was definitely the most competitive division I've ever ridden in, and I am thrilled to have finished on such a good score, even though our single rail was so costly in the final placings. Any day that ends with a 30 is a good one, no matter the color of the ribbon! I'm so proud of my pony, and couldn't be happier with the end result of our first run at Fair Hill.

And who knows... maybe a return to Beginner Novice might be closer than I thought?!