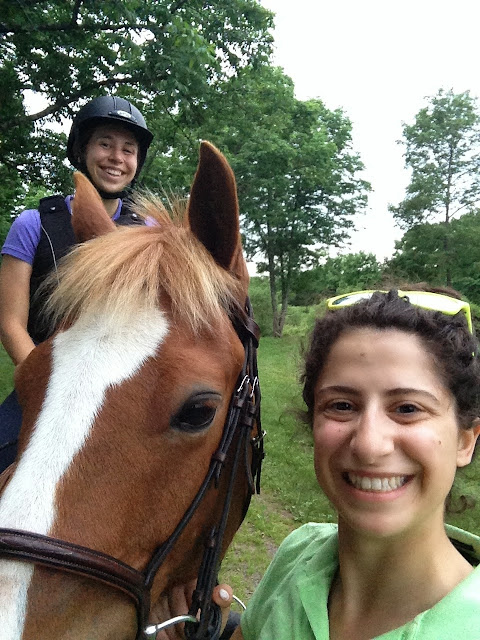 Many of you probably remember me mentioning my dear friend Rachel in past posts. She and her horse Toby have been a big part of my life since I got Dino, and I was thrilled to be able to spend time with her over this past weekend while she was home on winter break from vet school!

We, of course, headed straight to the barn to ride! I hopped up on Windows to give him what has become his weekly easy stroll around the farm, and Rachel climbed on Dino for the first time in years.

After spending some time trying to find a mostly-dry patch of ground to ride on, we rode back up to the top of the hill near the barn and did some easy flatwork there.

And it was there that Rachel got an intense foreign-language lesson.

For most of her life, Rachel has ridden forward-thinking horses with a good work ethic. TB's, Arabs, and the like. Horses that are generally happy to do what you ask, and that take correction well when they misbehave. She's an excellent, brave rider with a strong dressage background, and I'd be happy to put her on any horse of mine, any day. But, as it would happen, Rachel does not speak Pony.

Starting at the walk, Rachel had a hard time putting Dino on the bit.

This is not a problem she usually has.

But Dino's preferred method of communication is so different from what Rachel is used to riding (Toby's language is like Greek to me!) that she needed some help in figuring out how to ask my pony to do what she wanted.

It was really interesting for me to help Rachel ride Dino. He and I have developed this language and mode of communication that flows so easily between us, and it wasn't fully apparent to me how unique it is until I had to teach it to someone else.

The biggest challenge for Rachel was leaving Dino alone, which is definitely one of the hardest parts of riding him! Because he can get so behind the leg, and feel very resistant at times, the temptation is to want to hold him together and keep your leg on him actively all the time, and even get a little aggressive about it in an effort to 'break' the resistance and get him forward. With other horses that have a more cooperative, submissive personality, this type of riding works great.

Dino, however, does not think much of this method. He expressed is distaste by bucking.

Exasperated, Rachel looked at me for guidance.

I immediately saw what was happening between them - Rachel was demanding, not asking, and Dino was feeling a bit offended. Dino works best when his rider engages in a conversation with him, asking and reminding instead of telling. Rachel was just doing what usually works: applying all of her driving aids until the horse relented. I told Rachel to get her spur out of his side, take her leg off, and talk to him quietly with her seat and hands, suggesting to him that he put himself into a straight, round frame.

A back-and-forth conversation started between them, and Dino began to go round, with a soft slobbery mouth and sideways concentrating ears. Rachel had cracked the code! 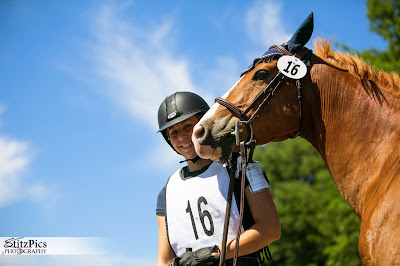 It was so fascinating to watch Rachel figure out how to communicate with Dino, and it helped me see our language in a new light. In teaching someone else to speak Pony, I saw how much conversation and negotiation is going on every second of every ride with Dino. It is constant! It's a running dialogue of "Step a little more, please," "Bend, please," "Thanks! Stretch your neck out to the bit just a bit more!""Now, sit a bit behind and lift your shoulders. Great!"

I noticed, too, that the most important part of the conversation is "Thank You." The release of thanking my pony for working with me in that moment, and relinquishing responsibility for carrying the pace and the body position I want from him. There is a level of respect involved that lets him know I trust him to do his job, and that encourages him to want to work for me.

Do you and your horse speak your own language?